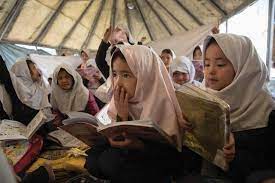 KABUL (Agencies): The country’s acting Interior Minister, Khalifa Sirajuddin Haqqani, met with UN top delegation, led by Under-Secretary-General for Humanitarian Affairs, Martin Griffiths.
According to the Ministry of Interior’s statement Griffiths said that without a doubt, some progress has been made here and we should not criticize each other’s actions; because too much criticism prevents understanding and elevates problems but women’s education and work are the basic rights that we demand to be restored.
For his part, Acting Minister of Interior, Haqqani, welcoming UN under Secretary General and his accompanying delegation, Affairs thanked the UN and International Organizations for their humanitarian aid to Afghans Haqqani stated that there has never been any proposal of depriving girls from education, but there is a difference of opinion in the education system which is resolvable.
“Afghanistan was in wars and hardships for almost half a century, so it is necessary for all Afghans to put in a lot of hard work for this country to stand on its feet through education; education is our own need; It is also a necessity for the well-being of our nation,”Haqqani added.
Minister Haqqani also highlighted that after several decades, a unified and sovereign state has been established in Afghanistan; security has been strengthened,so the International Community should support these developments.
On his visit, Martin Griffiths met with a number of senior officials of IEA, including the Ministries of Refugees and Repatriations and Rural Reconstruction and Development.