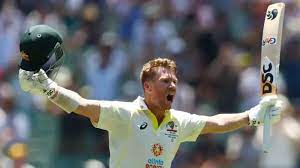 MELBOURNE (AFP): Veteran opener David Warner played down talk of retirement Friday after a gritty double century in his 100th Test against South Africa, saying he was hungry to tour India and England next year.

Speculation had been building over the 36-year-old’s future after a run of low scores, but his 200 in searing heat at the Melbourne Cricket Ground put to bed any concerns about his form.

Warner said he was in “as happy a place as I have been for a long time”, adding that selectors had told him he was key to their plans for a four-Test tour of India in February-March and a five-Test Ashes campaign in England that follows.

“The extra motivation for me is winning in India and completely winning a series in England,” he said.

“I’ve been told by the coach (Andrew McDonald) and the selectors that they’d like me to be there.

“Obviously there was a lot of stuff before this series going through my mind… of course there were doubts.

“But for me, it was about going out there and knowing that I’ve still got that hunger and determination.”

Warner said he would know when the time was right to call it quits, and it was not just yet.

“People keep telling me ‘you’ll know when it’s time’, and I haven’t really felt that at all yet,” he said.

“I’m still enjoying it, and I still know what energy I can bring to the team.”

The opener said he would know it was time if he started “losing that spark and energy around training, and taking the mickey out of people and playing some jokes and pranks here and there”.

His epic double century in Melbourne was characteristic of one of Australia’s greatest-ever openers, made against the odds and in aggressive fashion.

He eventually had to be helped off the field after retiring hurt, cramping up in the oppressive conditions.

“I’ve never experienced those kinds of cramps before, and if you could have had a camera in the change room for the next hour after I was off, it was comical.”