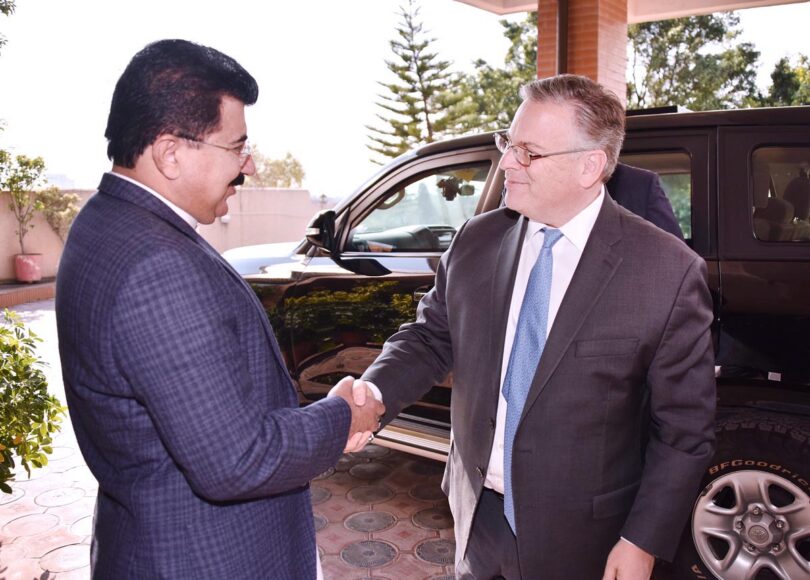 ISLAMABAD: Senate Chairman Muhammad Sadiq Sanjrani has said that Pakistan greatly values its multifaceted relationship with the United States and desires to further expand the friendly ties for the mutual benefit of the two sides. Senate Chairman expressed these views during a meeting with Ambassador of United States Donald Blome in Islamabad.

A reception was also hosted in honor of the Ambassador at Sanjrani’s residence. During the meeting, the dignitaries discussed matters of mutual interest, bilateral collaborations, and development in the region. The Senate Chairman thanked the US government for its cooperation and collaboration with Pakistan in various fields and appreciated the role of the US government in providing much-needed support to the Pakistani flood affectees.

He also emphasized increasing trade links and enhancement of bilateral relations in different sectors. The Senate Chairman said that the multilateral nature of relations between Pakistan and the United States spans decades.

He appreciated the assistance provided by USAID to the flood affectees of Balochistan province. He said that the community development work in the remote areas of Balochistan in collaboration with USAID is commendable and more needs to be done in this regard.

Senate Chairman emphasized on strengthening Pakistan-US bilateral trade and economic relations and said that cooperation in health, education and climate change and other fields is the need of the hour. The US is Pakistan’s largest trading partner and Balochistan is emerging as an attractive destination for investment due to the Gwadar port. US investment in Gwadar and other areas of Balochistan will be welcomed. He said that the Pakistani community in the US is playing an active role in politics and various other fields.

He said that the Pakistan diaspora in the US is acting as a bridge between the two sides. During the meeting, the importance of promoting institutional support and the need to increase parliamentary exchanges was emphasized. Senate Chairman described American cooperation as very important in view of the current economic situation of Pakistan.

Senate Chairman also mentioned the Reko Diq project. He said that US investors would be welcome to interact with Pakistani counterparts to explore new avenues for investment. On this occasion, American Ambassador Donald Bloome said that the USA will continue to help Pakistan to deal with natural disasters and that the United States attaches special importance to its relations with Pakistan. He also thanked Chairman Senate for the warm welcome and reception. (APP)