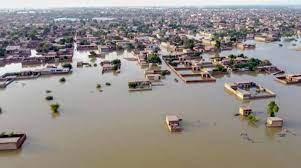 GENEVA (AFP): More than $16 billion is needed to help Pakistan recover from devastating floods that submerged a third of the country last year, and to better resist the impact of climate change, the United Nations said Thursday.

In a bid to meet the towering needs, Prime Minister Shehbaz Sharif and UN Secretary-General Antonio Guterres will host an international conference in Geneva next week.

The one-day event will gather high-level representatives from dozens of countries, including several heads of state and government, who have yet to be named.

While not strictly a pledging conference, UN and Pakistani representatives said Thursday that it aimed to mobilise support as the country deals rebuilds after the massive floods that left more than 1,700 people dead and affected over 30 million others.

“The needs are around $16.3 billion,” Knut Ostby, the UN Development Programme’s representative in Pakistan, told reporters.

Speaking by video from Islamabad, Syed Haider Shah, who heads the UN division in Pakistan’s foreign ministry, said his country hoped to cover half that amount through its own “domestic resources”.

“For the rest, we are looking at the donor support,” he said.

“This is a pivotal moment for the global communities to stand with the people of Pakistan,” said Khalil Hashmi, the country’s UN envoy in Geneva, while stressing that the conference would be the beginning of a multiyear process”.

A previous appeal for $816 million to help the victims of Pakistan’s cataclysmic monsoon floods has so far resulted in less than half that amount.

Yet the situation remains dire months after the monsoon rains ended, with flood waters still not receded in some parts of southern Pakistan.

Millions of people remain displaced, and while many have begun returning home, Ostby noted that they were returning to damaged or destroyed homes and mud-covered fields that cannot be planted.

The number of people facing food insecurity had doubled to 14.6 million, he said.

In Geneva, Pakistan is due to present a document laying out a wide-ranging strategy aimed at a climate-resilient recovery and reconstruction.

Pakistan, with the world’s fifth-largest population, is responsible for just 0.8% of global greenhouse emissions but is also one the most vulnerable countries to extreme weather caused by climate change.

“What is unique about this conference is that it is both mobilising support for the immediate response to the disaster… but it also comes at a time where the world is realising that this is a global issue,” Ostby said.

“It has to be tackled with global solidarity.”