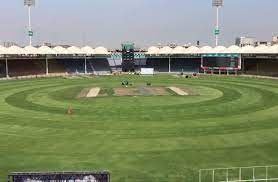 LAHORE: The PCB has made a decision to change the venue of the Test match between New Zealand and Pakistan from Multan to Karachi.

According to sources, the decision is made as the plain areas of the country have been in the grip of dense fog.

The New Zealand cricket team arrived in Pakistan on Wednesday for the Tests and ODI series.

The first Test between Pakistan and New Zealand Test will start on December 26 at the National Bank Cricket Arena in Karachi.

The second Test was scheduled to be held in Multan, but sources said the board decided to hold the match in Karachi as the foggy spell is likely to stay in the plains of Punjab.

The Black Caps will also play three ODIs from January 10 to 14 in Karachi after the conclusion of the Test series.

The Green Shirts have named an uncapped middle-order batter Kamran Ghulam and fast bowler Hasan Ali in the 16-player squad for the two-Test series against New Zealand.