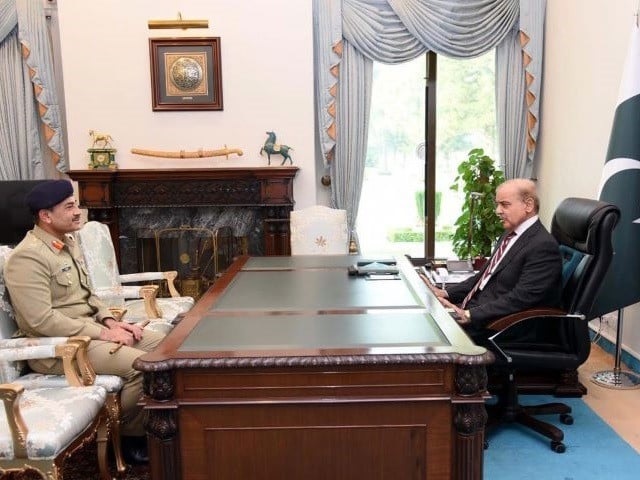 ISLAMABAD (INP): Chief of Army Staff (COAS) General Asim Munir called on Prime Minister Shehbaz Sharif here at the PM House on Thursday. Professional as well as matters relating to national security were discussed in the meeting, a statement issued by the PM Media Wing here said.
The meeting also discussed rising terror incidents in the country.
Meanwhile, Prime Minister Shehbaz Sharif has summoned a meeting of the National Security Committee (NSC) on Friday to discuss matters related to national security. Sources privy to the matter told ARY News that the PM has convened the NSC meeting at PM House on Friday, which would be attended by the defence minister, interior minister, foreign minister and finance minister as well as the military chiefs. The NSC huddle would be briefed on the recent terror wave in Pakistan, sources say.
PM briefed on preparations for Climate Resilient Pakistan conference: Federal Minister for Climate Change Sherry Rehman called on Prime Minister Shehbaz Sharif here on Thursday and briefed him about the preparations for the upcoming Climate Resilient Pakistan conference. The international conference on Climate Resilient Pakistan will be co-hosted by the Government of Pakistan and the United Nations to be held in Geneva on January 9, 2023.
The prime minister and the federal minister discussed the matters pertaining to climate change. The conference will bring together governments, leaders from the public and private sectors and civil society to support the people and the government of Pakistan after the devastating floods of 2022.
Rehabilitation of flood-hit population big challenge: PM: Prime Minister Shehbaz Sharif on Thursday said rehabilitation of flood victims and the reconstruction of damaged infrastructure was a big challenge for a developing country like Pakistan.
The prime minister expressed these views as he chaired a review meeting on the Resilient Pakistan Conference to be held in Geneva next month. Shehbaz Sharif said hundreds of lives and billions of dollars had been lost this year due to flash floods in Pakistan.
He vowed to make every possible effort to accommodate the flood-struck population. At the climate change conference in Geneva, he said, the government would convey to the world the plight of Pakistan’s flood-hit people. The proposals and detailed plan of action regarding the conference were presented before the meeting.
The meeting was informed that the participation of friendly countries as well as development partners and international financial institutions was also expected in the conference. The prime minister directed to finalize the action plan for the conference on a priority basis. Federal Ministers including Ishaq Dar, Sardar Ayaz Sadiq, Ahsan Iqbal, Sherry Rehman, Marriyum Aurangzeb, Minister of State for Foreign Affairs Hina Rabbani Khar, Special Assistants Syed Tariq Fatemi, Jahanzeb Khan, Syed Fahd Hussain and concerned senior officials were present.
PM, Kaira discuss Kashmir Affairs Ministry’s matters, political situation: Adviser to the Prime Minister on Kashmir and Gilgit Baltistan Affairs Qamar Zaman Kaira called on Prime Minister Shehbaz Sharif here on Thursday.
The matters relating to the ministry and the overall political situation in the country came under discussion.