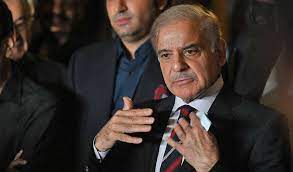 DERA ISMAIL KHAN: Prime Minister Shehbaz Sharif fired a broadside at former prime minister Imran Khan who, he said, had strained Pakistan’s relations with all friendly countries during his tenure.

The prime minister stated this while addressing an event in Dera Ismail Khan on Monday after attending a foundation-stone lying ceremony of various development projects for South Khyber Pakhtunkhwa, especially DIK.

He lashed out at Imran Khan for disrespecting Pakistan in the comity of nations by selling gifts presented to him by the foreign dignitaries during his tenure. He lamented that Imran sold a luxury watch with a model of Holy Kaaba on it and put money in his pocket.

Shehbaz hit out at former premier for bringing the country to the brink of default. He said Imran left country’s economy in tatters.

He said that Imran strained relations with all friendly countries including China.

He appreciated the role of friendly countries which helped Pakistan during calamitous floods that hit the country this monsoon.

Taking a jibe at PTI for its claim of good governance in the province where it is ruling, the prime minister said that he has seen all these tall claims fell to the ground.

He said that his government distributed Rs90 billion among flood affectees and provided cash assistance of Rs25,000 per family.

He said it was PML-N supremo Nawaz Sharif who spread the network of motorways across the country.