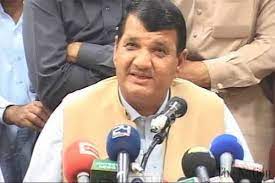 He was addressing a big public gathering after formally inaugurated upgradation of Thakot Grid from KVA 3300 to 132000KV and transmission line from Aalai Khwar Power House to Thakot grid here at Thakot. Engr Amir Muqam said these mega projects were the long awaited demand of people that was fulfilled today by the PML-N.

Muqam said his party strongly believed in practical works rather hallow slogans, and that established a network of motorways including Hazara Motorway by former Prime Minister Nawaz Sharif that benefits all districts of Hazara division including Batagram.

Amir Muqam said that PML-N stood with the people of Batagram in every difficult situation whether it was earthquakes, floods or terrorism and urged people of the district to now extend full support to Nawaz Sharif and PMLN.

He said Imran Khan was a big liar and people of Batagram would reject him in the upcoming general election.
Muqam said that people were fed up with the negative politics of Imran Khan and poor performance of PTI and pinned high hopes from PML-N.

The speakers said that Pakistan Tahrik Insaf had failed to address problems of people of Khyber Pakhtunkhwa including Batagram despite its nine years rule in the province and was now looking towards PML-N for addressing their issues.
On this occasion, people raised slogans in favour of Prime Minister Shehbaz Sharif, Bawaz Nawaz Sharif and Amir Muqam.