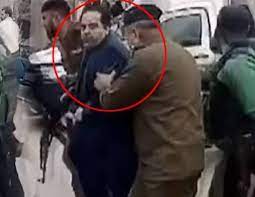 JHELUM: Police on Wednesday arrested a brother of PTI leader Fawad Chaudhry and other party workers who gathered to stage protest against the arrest of the former information minister in Jhelum.

Fawad Chaudhry was arrested from his residence in Lahore in the wee hours on Wednesday over a  provocative  statement against the top electoral body. A case was registered against him under sections 153A, 506 and 124 A of the Pakistan Penal Code at the Kohsar police station in Islamabad on a complaint lodged by Election Commission of Pakistan Secretary Umer Hameed.

A group of PTI leaders led by Fawad’s brother Faraz Chaudhry was protesting on GT Road in Jhelum when police resorted to baton-charge to disperse them. The security officials also arrested Faraz and other party workers over the protest.

Meanwhile, a court in Lahore allowed police on Wednesday to take Mr Chaudhry to Islamabad and produce him before a relevant forum.