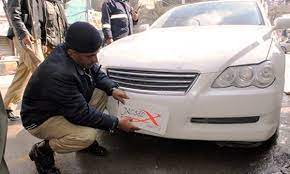 ISLAMABAD (NNI): In a bid to curb noise pollution and ensure public safety, the Islamabad Capital Police bulldozed over 4,000 pressure horns and fancy number plates, a police public relations officer said. He said that, Chief Traffic Officer Islamabad, SP (Traffic) and other senior police officials witnessed the bulldozing process at Traffic Police Office (Faizabad).
Following the directions of Inspector General of Police (IGP) Islamabad Dr. Akbar Nasir Khan, efforts are underway to ensure a safe road environment and disciplined traffic system in the city.
Chief Traffic Officer Islamabad said that, the traffic police was striving to make the capital “noise-free”. Islamabad capital police has constituted special squads to check the noise pollution, which takes action against installation of pressure horn in Public Service Transport and small as well as on heavy vehicles. The Chief Traffic Officer said that to make Islamabad a noise free city, strict action is being taken against pressure horn users while special directions have been issued to transporters in this regard. He appealed to transporters to cooperate with Islamabad capital police to check noise pollution.
The use of fancy number plates is also a security risk and prohibited, he added.
CTO Islamabad urged the citizens to display authorized number plates issued by the excise and taxation office and cooperate with police for a safe road environment.
He further said that, the citizens can lodge complaints about vehicles using pressure horns at Islamabad capital police helpline “Pukar-15” as strict action would be ensured against such vehicles, he maintained.