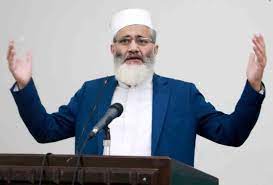 LAHORE (INP): Ameer Jamaat-e-Islami (JI) Sirajul Haq has expressed the resolve that the JI will give mayor to Karachi, saying the party is ready to hold talks with all stakeholders on the agenda except the People’s Party.

Presiding over a meeting of central leadership at Mansoorah on Tuesday, he said the JI would only hold negotiations with Sindh’s ruling party if the latter accepted the JI as the top leading party of the port city. Sirajul Haq alleged the PPP was directly involved in electoral rigging in the second phase of the local government elections throughout the province and particularly in Karachi, and it had tried to block the way of the JI under a conspiracy in some union councils (UCs).

“We have proof of the election rigging in at least nine UCs,” he said, adding that had the rigging not been held in some areas, the JI would have emerged single largest party in Karachi on Sunday. He asked the PPP to accept the reality and give back the JI mandate if it was serious about moving ahead. He further said the JI believed in dialogue, hoping the PPP would accept the real mandate of the people of Karachi.

The JI Chief reiterated the demand for electoral reforms, saying the JI had long been calling for free and fair polls. The bad practices of the past of controlling the election results would no longer be accepted by the people, he said, adding the rigging in polls will bring anarchy to the country. He said the people were much more aware now in the age of social media and technology, and they could not be deprived of practicing their democratic rights and electing their representatives in transparent and free manners.

Separately, the workers of the JI hold protest demonstrations in various cities against the rigging in the Karachi elections on the appeal of Sirajul Haq. The JI chief said the protest rallies would continue until the poll results are announced according to the results of farm 11, which the JI contesters received in their UCs. JI Karachi emir Hafiz Naeemur Rahman briefed the central leadership about the latest situation. Haq congratulated Rahman and other leaders and workers of the JI on their success, vowing the JI would continue serving the people of Karachi.