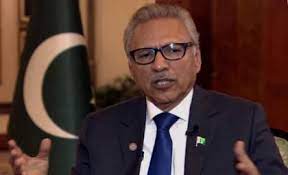 ISLAMABAD: President Dr Arif Alvi on Thursday called for launching a consensus-based nationwide, comprehensive and all-encompassing electricity, gas and water conservation strategies to conserve precious national resources and divert them for the welfare and prosperity of the people.

The president, during a meeting on energy conservation at Aiwan-e-Sadr, underscored that a comprehensive policy and programme should be prepared after consulting all stakeholders, including the provinces, besides launching an awareness campaign across the country to conserve electricity, gas and water.

The president said that there was a need to generate out-of-the-box ideas, absorb creative ideas, benchmark best practices around the world, develop policies and strategies around them and ensure their implementation on a timeline basis to achieve the desired objectives in the shortest possible timeframe.

“Pakistan can make rapid and accelerated progress in all sectors provided it enhanced and accelerated the implementation speed on initiatives of national importance, following a strict timeline while maintaining quality and ensuring desired outputs and outcomes”, he observed. (INP)