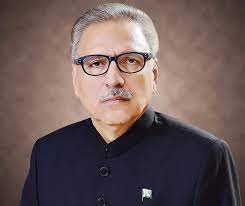 KARACHI: President Dr. Arif Alvi on Monday urged all government officials to ensure the dispensation of justice to the public and their service in its true spirit so that problems faced by citizens could be resolved in the shortest possible time.

The president was addressing an awareness seminar titled “Roles, functions and Performance of Federal Tax Ombudsman” held here at Sindh Governor House Karachi. FTO’s annual report for the year 2021 was also unveiled at the occasion.

President Arif Alvi said that it was among the primary duties of an ombudsman that he should expedite the process of dispensation of justice to the aggrieved citizens and find a way out for resolving the issues affecting citizens in an individual capacity or as a larger group.
The president said the written words of law sometimes cannot cater to and address all given situations therefore superior judiciary has been empowered to interpret the provision of the constitution and law.

He said that legislation is a dynamic process that keeps on evolving to cater to new development, products, emerging business and trade processes, and development of the society which sometimes slow down the dispensation of services to the public.

Like the overall legal framework tax laws also pass through a dynamic and progressive process and they always require amendments and interpretation for their implementation in the spirit of facilitating and serving the public.

He said that there is a need to create friendly, services-oriented, and objective tax system where every taxpayer willingly and happily follows the law and pays tax obligations without any fear of exploitation, harassment, or intimidation.

Ombudsman secretariats were important organs of state and those could play an effective role in resolving public issues by right interpretation of concerning laws and providing a remedy to the aggrieved citizens, Dr. Arif Alvi said adding that ombudsmen- whether it is federal, tax, or insurance ombudsman- were not rival to government departments and organizations but those were to facilitate the public and ensure their access to the concerned forums for resolution of their grievances.

Referring to the era of Hazrat Muhammad s.a.w. and Khulfa-e-Rashidain, the president said that whenever someone was appointed to administer public affairs at that time he was directed to ensure public access and keep the sense of service supreme. “The spirit of keeping the doors opened and listening to people’s grievances must be kept alive,” he stressed.

Corruption and tax evasion prevailed all around the world while there were certain loopholes and anomalies in the law and rules which allow their misuse by the public or the authority, he noted and observed that corruption was a menace that could not be rooted out completely from society but it was regrettable that its proportion in our society was higher than other developed nations.

The president said, unfortunately, fake news, disinformation, and misinformation thrive on the words spoken not on the spirit and real intent of the speech. He called upon the journalists’ community that while reporting on serious national issues they should focus on the real intent and objectives of the statement rather than spinning the news.

Dr. Arif Alvi said that the big machinery of statehood was like a narrow tunnel having dictatorship and anarchy on its outer rungs and democracy in the middle which balances out everything so that there is justice in the society and a viable and practical way out could be drawn out between extreme states of absolutism and anarchy.

The president stressed imparting awareness to the public and said that mass awareness was an important element but a well-thought-out decision itself was an effective medium of promotion as it reinforces public confidence and persuades more people to refer to the institution to redress their grievances.

Federal Tax Ombudsman Dr. Asif Mahmood Jah addressing the occasion said that FTO is a dynamic and vibrant organisation working for giving a respectable status to taxpayers so that they do not have to face problems while paying taxes and resolution of issues. FTO through a resolution of individual and collective issues of a large number of people has become a public relief organisation and its decisions affect millions of people, he said adding that in a recent case pertaining to deduction in the tax rate on locally assembled vehicles FTO’s decision provided relief to over 9,500 taxpayers while people would get relief in another case of same nature about tax on tractors.

He informed that FTO has presented recommendations regarding the issue of stuck-up containers of imported soya beans at the port.
President Arif Alvi handed over cheques for the tax refund to citizens who had booked vehicles at higher rates but the government afterward reduced the rate. (APP)