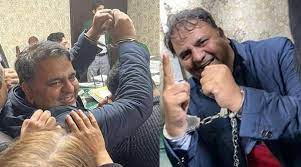 LAHORE: PTI leader Fawad Chaudhry has been arrested from his house in Lahore on Wednesday, Farrukh Habib claimed.

According to reports, a case was registered against Fawad Ch in Kohsar police station in Islamabad under sections 153-A (promotion of enmity between groups), 506 (criminal intimidation), 505 (statement conducing to public mischief) and 124-A (sedition) of the Pakistan Penal Code.

The case was registered on the complaint of election commission secretary Umar Hameed.

A judicial magistrate in Lahore has granted police one-day transit remand of PTI leader Fawad Chaudhry, allowing them to shift him to Islamabad.

Pronouncing his verdict which he reserved earlier, Judicial Magistrate Mudassar Hayat directed the police to shift the PTI leader to Islamabad after completion of his medical check-up.

In his tweet posted early this morning, Farrukh Habib wrote: “Fawad Chaudhry has been arrested by the police from his house. The imported government has gone berserk.”

According to sources, Fawad Chaudhry’s transit remand will be obtained in Lahore and he will be shifted to Islamabad today.

Another PTI leader Hammad Azhar tweeted: “Fawad Ch’s phone has been switched on at CTD Police Training College at Chung, Lahore. I have reached the location.”

Fawad Ch’s brother Faisal Hussain Chaudhry has also confirmed his arrest. He said some unknown persons came in vehicles without number plates and illegally took Fawad with them. They did not show any warrant nor did reveal their identities.

According to the FIR, Fawad Ch said that the Election Commissions’ position was like a clerk (Munshi) and the election commissioner only put his signature like a clerk. Ch further said ‘if you are so weak, go away and sit at your homes’.

The case was registered on Tuesday at 10pm.

The Islamabad police in its tweet said: “A case was registered against PTI leader Fawad Chaudhry on the request of the constitutional body.

It was registered in Kohsar police station on the request of Secretary Election Commission of Pakistan.

Fawad Chaudhry threatened the Chief Election Commissioner and ECP members to prevent them from performing their duties.

Fawad Chaudhry has tried to incite people against the constitutional institutions and inflame their sentiments.

The case is being processed according to law.

Fawad’s arrest came an hour after he, along with other party workers, assembled outside PTI Chairman Imran Khan’s Zaman Park residence in Lahore, claiming to avert the government’s alleged plan to arrest the party chief.

An image of the FIR.

The court also directed that medical checkup of the PTI leader should be conducted.

Upon handcuffed Fawad’s arrival at Cantt Court amid tight security, PTI lawyers and workers showered rose petals on him.

Due to the rush of lawyers in the court, the judge had to send Fawad to his chamber.

Fawad Chaudhry told the court that he was a senior lawyer in Supreme Court and he should be treated respectfully. He said police had included sedition clauses in FIR to prevent him from getting bail. He maintained that the whole time in custody he was kept blindfolded by police with his eyes tied with a band. He said he was treated like a “terrorist”.

The PTI leader claimed that what he said about election commission, the whole Pakistan was talking about it.

PTI leader’s counsels pleaded to court that transit request demand should be rejected. The counsels requested the court that cuffs of their client should be opened. They said the judge should decide the matter as per law. They said police wanted to take Fawad to some other city.

He added that the vehicle in which Fawad Chaudhry had been taken away also tried to intercept Farrukh Habib.

“Two other vehicles also chased the car of Farrukh Habib,” he maintained.

“Fawad Chaudhry is a brave person. He led his life with law and Constitution, [but] he was picked up like this,” Hammad lamented.

“Fawad Chaudhry’s family was told where he was kept. An attempt has been made to suppress the voice of the PTI,” he claimed.

“Fawad Chaudhry raised the voice of press freedom. Arshad Sharif is alive even today. The voice of Azam Swati and Imran Riaz is more powerful than ever,” he remarked.

“There will be sit-ins in every chowk if the party is not told where Fawad Chaudhry has been kept,” he declared.

“It is not the fault of Fawad Chaudhry that every child is spitting at the system of the country,” he pointed out.

“Such a move in the country will increase economic and political chaos,” he said and added that the PTI would give a call for nationwide strike in a while.

According to sources at the hospital, Fawad Chaudhry’s blood sugar was recorded at 183, blood pressure at 160.

The sources further said there were apparently no torture marks on Fawad’s body.

The sources said the PTI leader was feeling mental stress for which he has already been using medicine.