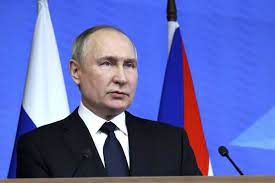 MOSCOW (AFP): Russian President Vladimir Putin blasted the West for trying to “tear apart” Russia, in extracts from an interview to be aired on national television later Sunday.

“At the core of it all is the policy of our geopolitical opponents aiming to tear apart Russia, the historical Russia,” Putin said.

“They have always tried to ‘divide and conquer’… Our goal is something else — to unite the Russian people,” he said.

Putin has used the concept of “historical Russia” to argue that Ukrainians and Russians are one people — undermining Kyiv’s sovereignty and justifying his 10-month offensive in Ukraine.

“We are acting in the right direction, we are protecting our national interests, the interests of our citizen, of our people,” Putin said.

The president repeated claims that Moscow was “ready to negotiate with all participants in this process (to find) an acceptable solution” to the conflict.

In his first trip outside Ukraine since the offensive began in February, Ukrainian President Volodymyr Zelensky earned firm pledges of support from US President Joe Biden, including the Pentagon’s most advanced air defence system.

“Of course we will destroy it, 100 percent!” Putin said, referring to the Patriot missile battery promised to Zelensky.