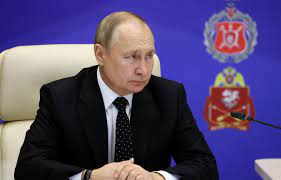 MOSCOW (INP): President Vladimir Putin has sought proposals from his armed forces commanders on how they think Russia’s military campaign in Ukraine should proceed, during a visit to the operation’s headquarters, the Kremlin said.
A series of defeats in 10 months of fighting, resulting in Russian withdrawals from areas around the capital Kyiv and Ukraine’s second city Kharkiv and most recently from the city of Kherson, have forced Putin to call up reservists and generated rare public criticism from military bloggers and some allies.
Since the appointment in October of Air Force General Sergei Surovikin to lead the campaign, Russian ground forces have focused more on defence than attack, while waves of air strikes on cities have left millions of Ukrainian civilians without heat, light or water for days on end as winter sets in.
In video footage released by the Kremlin on Saturday, Putin presided at a meeting of around a dozen people at a circular table, flanked by Defence Minister Sergei Shoigu and Chief of General Staff Valery Gerasimov — both of whom have been heavily criticised by hawkish commentators. Putin was then shown at the head of another conference table at the joint task force headquarters, inviting suggestions from a row of military commanders.
“We will listen to the commanders in each operational direction, and I would like to hear your proposals on our immediate and medium-term actions,” Putin said. Surovikin was also shown attending the meetings in still photographs on the Kremlin website.