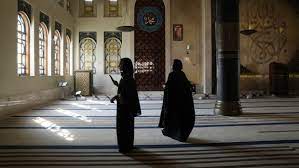 DOHA (AP): Fatima Garcia donned a headscarf and a black abaya — a long, loose-fitting robe — over her clothes as she walked into a mosque in Doha to learn about Islam.

In Qatar to enjoy the World Cup with friends, the Salvadoran visitor took a day off from soccer to go sightseeing at the Katara mosque, where preachers have been introducing Islam in multiple languages to curious fans from around the world.

“Qatar is my first exposure to Islam,” Garcia said inside the house of prayer, also known as the blue mosque for its beautiful turquoise tiles. “Qatar has been a life-changing adventure because it gives you a perspective on different cultures.”

Hundreds of thousands of visitors have come to Qatar during the World Cup. For many it’s their first visit to a Muslim country. Those who don’t venture far beyond the stadiums and Doha’s glitzy hotels will have only limited exposure to the country’s religion, such as hearing the call to prayer at a distance or witnessing Muslims prostrate at prayer rooms in stadiums, airports and hotels. But for those who are curious to find out more about Islam, Qatari authorities and religious officials are eager to help.

Local mosques are offering multilingual tours to visitors and the Islamic Cultural Center in Doha offers a virtual reality tour of the holy city of Mecca. Booths at tourist sites hand out free copies of the Quran and brochures about Islam are available in hotel lobbies. Billboards have been set up across Doha featuring U.S. Olympic fencer Ibtihaj Muhammed and other Muslim personalities as part of a campaign encouraging people to explore Islam.

“Why during the World Cup? Everyone is coming here from across the world to Qatar, a Muslim country, and it’s an opportunity to educate people about the faith,” said Abu Huraira, a volunteer for the campaign by the Explore Islam Foundation and the Islam & Muslims Initiative.

Qatari officials say they hope the tournament will help provide visitors with a better understanding of their culture and that of the larger region.

Qatar follows an ultraconservative form of Sunni Islam known as Wahhabism. But unlike neighboring Saudi Arabia, where adherence to Wahhabism led to strict segregation of unmarried men and women, banned women from driving and kept concerts, cinemas and even yoga off-limits for decades, Qatar has long sponsored the arts, allowed women to participate in high levels of governance and encouraged tourists to feel at ease.

The World Cup host, though, has faced intense criticism over human rights issues, including the treatment of migrant workers, and accusations of “sportswashing” or attempting to use the event’s prestige to remake its image.

Qatari officials have argued that the nation’s progress and achievements are being overlooked. The ruling emir, Sheikh Tamim bin Hamad Al Thani, said some of the criticism against the first Arab and Muslim country to host the World Cup included “fabrications and double standards.”

The Ministry of Endowments and Islamic Affairs and the host country’s Supreme Committee for Delivery and Legacy did not respond to requests for comment.

Back inside the ornate Ottoman-style Katara mosque, Riffat Ishfaq, a guide from Pakistan, told Garcia that it was designed by Turkish interior designer Zeynep Fadillioglu, whose first name is the Turkish form of the name of the eldest daughter of the Prophet Muhammed. The tiles had been handmade, Ishfaq said; the columns were covered with leather and the domed roof contained gold. By the end of the tour, Garcia also learned why women dress modestly in Islam and the origins of the religion.

“We want to tell people about Islam. We feel pride in our identity,” Ishfaq said, before telling Garcia to keep the abaya as a parting gift. “This helps to dispel misconceptions.”

Nearby, Sergio Morales, a Guatemalan who had come for the whole tournament, finished listening to a tour and walked out of the mosque to a booth located at the entrance where he asked for a free copy of the Quran.

“Today I became interested because the guided tour was in Spanish and I could understand it all,” he said. “There should be guides in Spanish in every mosque because there are so many Latin American people coming to these countries.”

Booths with free Qurans and booklets introducing the religion in several languages are also available in the winding cobbled alleys of Souq Waqif, the capital’s oldest bazaar where stores hawk spices and perfumes, scented oils and silk scarves.

Just steps from there, World Cup visitors walked into the spiral-like building of the Abdullah Bin Zaid Al-Mahmoud Islamic Cultural Center, for a tour and a visit to the mosque, where people gathered for Friday prayer.

Carlos Bustos, Mireya Arias and their sons, 8-year-old Jacobo and 13-year-old Matias toured the cultural center. The Colombian family read information on large placards about the contributions of the Islamic world to medicine, science, math and architecture.

“What we’ve seen is that they’ve made an effort to change the image that we have in the West of seeing Islam. It’s breaking that barrier,” said Carlos Bustos, who along with his sons had dressed in traditional Qatari clothes.

“They’ve told us that we’re very different but we see more similarities than differences,” he said.

His wife, Mireya Arias, admired the devotion of Muslims to their faith and how they follow the call to prayer. She also appreciated the efforts made by Qatar to introduce visitors to Islam.

“They’ve used a lot of strategies to get closer to visitors, for us to understand and learn,” she said. “When you’re on the buses that take you to the (World Cup) stadiums, you point to a QR code and it gives you explanations about the Quran.”

Doha’s Museum of Islamic Art also offers glimpses into religious beliefs and rituals. Visitors can read about the five pillars of Islam — the profession of faith, prayer, almsgiving, fasting and hajj or pilgrimage — or learn about hajj rituals and different funerary practices in the Islamic world.

“The more you understand this Islamic culture, the more fascinating it is,” said Jose Antonio Tinoco, a Brazilian museum visitor, who wore his country’s soccer jersey. “The most important part of the museum for me was the part on Islam.”