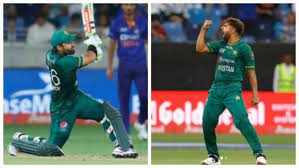 DUBAI: The ICC Team of the Year recognises 11 outstanding individuals who have impressed one and all – be it with the bat, the ball or their all-round exploits in a calendar year.

Here, we take a look at 11 players who make the cut in the shortest format of the game for men’s cricket.

Jos Buttler had an incredible year, both as a player and captain. In 15 matches, Buttler accumulated 462 runs at an explosive strike rate of 160.41, often batting oppositions out of the game in the opening exchanges. Following Eoin Morgan’s retirement in June 2022, Jos Buttler was appointed limited-overs captain of England and in his very first ICC tournament, he went all the way to get his hands on the ICC Men’s T20 World Cup 2022. He led by example and was England’s highest run-getter at the tournament with 225 runs in six games at a strike rate of 144.23. Buttler solidified England’s white-ball domination by winning the T20 World Cup, thus holding both the Men’s senior World Cup titles at the same time.

Mohammad Rizwan continued his form from 2021 into 2022, amassing 996 runs in the year, second only to India dynamo Suryakumar Yadav on the list for most Men’s T20I runs. Rizwan smashed 10 half-centuries for the year in the shortest format and finished as the joint-highest scorer for Pakistan at the T20 World Cup with 175 runs. Enhancing his reputation as a high-quality anchor at the top, Rizwan holds on to the opening slot alongside Buttler in the ICC T20I Team of the Year for the second year in a row.

2022 was the year Virat Kohli once again showed glimpses of Virat Kohli of old. He took the Asia Cup by storm, finishing as the second-highest run-getter with 276 runs in five games. He also brought an end to his century drought of close to three years with a magnificent century against Afghanistan. Virat Kohli scored an unbeaten 53-ball 82* to help India secure an opening victory against Pakistan in their ICC Men’s T20 World Cup 2022 encounter. The form carried over to the T20 World Cup, where Kohli played one of the greatest T20I innings in the heist against Pakistan in Melbourne. The 82* set the tone for the rest of the tournament, where he scored three more fifties and finished as the highest run-scorer with 296 runs.

Suryakumar Yadav had a sensational 2022 in T20Is, becoming just the second batter to score more than 1000 runs in a calendar year in the format. He ended the year as the highest run-getter, scoring 1164, including two hundreds and nine half-centuries while striking at a stunning 187.43. SKY displayed his majestic prowess at the T20 World Cup as well, scoring 239 runs while going at a strike rate of 189.68. He finished the year as the No.1 batter in the MRF Tyres ICC Men’s T20I Player Rankings.

Batting, bowling, fielding – there’s nothing Glenn Phillips can’t do on the cricket field. The 26-year-old displayed remarkable consistency once again in the shortest format, aggregating 716 runs in 21 matches at a strike rate of 156.33. At the T20 World Cup, he set the tone with a gravity-defying catch in the opening game against Australia and then went on to score a century against Sri Lanka. He played a pivotal role in New Zealand’s run into the final four, scoring 201 crucial runs while striking at 158.26.

Sikandar Raza had a stellar year with the bat and also contributed significantly with the ball in T20Is. He was at the centre of all things good that happened for Zimbabwe Cricket during the year, with the all-rounder putting in one brilliant performance after another in the shortest format. Not only was he the leading scorer for Zimbabwe with 735 runs but he also led the wickets chart for them, scalping 25 wickets at an excellent economy rate of 6.13. He was the Player of the Tournament at T20 World Cup Qualifier B in July and carried his form into the marquee event, winning the Player of the Match thrice, including Zimbabwe’s epic win over Pakistan in Perth.

In 2022, Hardik Pandya came into his own as the all-rounder India have wanted him to be, contributing heavily both with the bat and the ball. He enjoyed his best year by numbers in the Indian colours, scoring 607 runs while also picking up 20 wickets. While Virat Kohli’s knock against Pakistan at the T20 World Cup will be remembered for the ages, it was Pandya at the other end who helped the rebuild. Later in the tournament, he also displayed his incredible hitting, with his 33-ball 63 taking India to a respectable total against England in the semi-final, though the knock eventually went in vain.

The Player of the Tournament at the 2022 T20 World Cup, Sam Curran added another dimension to his bowling by becoming a solid death-overs specialist in England’s title-winning campaign. He stepped up in the absence of several key bowlers, picking up 13 wickets from six matches. He recorded figures of 5/10 against Afghanistan during the tournament, which was the first five-wicket haul by an England bowler in men’s T20Is. Curran saved the best for last, with his spell of 3/12 in the final breaking the back of the Pakistan batting line-up.

Wanindu Hasaranga continued to be Sri Lanka’s talisman in a year where they reigned supreme as the champions of the Asia Cup. He picked up nine crucial wickets in six games at the Asia Cup but at the same time, showed that he can do the damage with the bat, stroking a brilliant 27-ball 37 in the final against Pakistan to rescue his side. The wrist-spinner weaved his magic at the T20 World Cup as well, picking up 15 wickets in eight games.

Pakistan enjoyed a great 2022 as a team – making it to the final of the Asia Cup and later the semi-final of the T20 World Cup – and Haris Rauf was a crucial figure in both of those campaigns. In the calendar year, no Pakistan bowler picked up more wickets than the right-armer (31). Rauf impressed everybody with his raw pace and often left batters clueless. In the absence of Shaheen Afridi during the latter half of the year, Pakistan relied heavily on Rauf to lead the bowling attack. In the Asia Cup, he was the joint second-highest wicket-taker with eight wickets. Later in the T20 World Cup, Rauf scalped two crucial wickets in the final, including that of Jos Buttler, to give Pakistan a chance but England eventually prevailed.

The second-highest wicket-taker in the calendar year, Josh Little spearheaded Ireland’s attack in 2022 with a great pedigree. The left-arm pacer was a menace with the ball, taking 39 wickets during the calendar year, 11 of which came at the T20 World Cup. Though his most memorable performance was his four-for against New Zealand in Belfast in July 2022, his opening spell in Ireland’s clash over neighbours England at the T20 World Cup proved to be a match-winning one as they emerged victorious by DLS method.