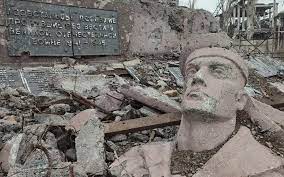 KYIV (AP): Throughout Mariupol, Russian workers are tearing down bombed-out buildings at a rate of at least one a day, hauling away shattered bodies with the debris. Russian military convoys are rumbling down the broad avenues of what is swiftly becoming a garrison city, and Russian soldiers, builders, administrators and doctors are replacing the thousands of Ukrainians who have died or left.

Many of the city’s Ukrainian street names are reverting to Soviet ones, with the Avenue of Peace that cuts through Mariupol to be labeled Lenin Avenue. Even the large sign that announces the name of the city at its entrance has been Russified, repainted with the red, white and blue of the Russian flag and the Russian spelling.

Eight months after Mariupol fell into Russian hands, Russia is eradicating all vestiges of Ukraine from it – along with the evidence of war crimes buried in its buildings. The few open schools teach a Russian curriculum, phone and television networks are Russian, the Ukrainian currency is dying out, and Mariupol is now in the Moscow time zone. On the ruins of the old Mariupol, a new Russian city is rising, with materials from at least one European company, The Associated Press found.

But the AP investigation into life in occupied Mariupol also underlines what its residents already know all too well: No matter what the Russians do, they are building upon a city of death. More than 10,000 new graves now scar Mariupol, the AP found, and the death toll might run three times higher than an early estimate of at least 25,000. The former Ukrainian city has also hollowed out, with Russian plans to demolish well over 50,000 homes, the AP calculated. Death surrounds Mariupol in the rapidly growing cemeteries on its outskirts, and its stench lingered over the city into the autumn. It haunts the memories of survivors, both in Mariupol and in exile.

Every one of the dozens of residents the AP spoke with knew someone killed during the siege of Mariupol, which began with the Feb. 24 invasion. As many as 30 people arrive at the morgue each day in hopes of tracking down a loved one. Lydya Erashova watched her 5-year-old son Artem and her 7-year-old niece Angelina die after a Russian shelling in March. The family hastily buried the young cousins in a makeshift grave in a yard and fled Mariupol.

They returned in July to rebury the children, only to learn while on the road that the bodies had already been dug up and taken to a warehouse. As they approached the city center, each block was bleaker than the last. “It is horror. Wherever you look, whichever way you look,” said Erashova. “Everything is black, is destroyed.”

Neither she nor her sister-in-law could bear to go inside the warehouse to identify the bodies of their children. Their husbands, who are brothers, chose the tiny coffins – one pink and one blue – to be placed together in a single grave. Erashova, who is now in Canada, said no Russian rebuilding plan could possibly bring back what Mariupol lost.