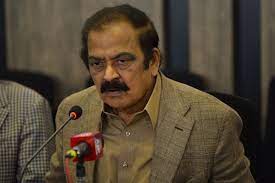 ISLAMABAD: Minister for Interior Rana Sanaullah Khan on Saturday said that the federal government was seriously concerned over the worsening law and order situation in Khyber Pakhtunkhwa.

The minister criticised the KP government for not learning a lesson from the terrorist attack on Counter Terrorism Department Centre in Bannu last month, where law enforcers were held hostage by militants. In a statement, he lambasted KP Chief Minister Mahmood Khan and said that all energies of the chief minister were focused on dissolving the assembly.

“The KP police are not safe from terrorist attacks, then what will be the state of people’s protection?”, the minister posted on his twitter handle. He paid tribute to the martyred police officials and saluted their sacrifices.