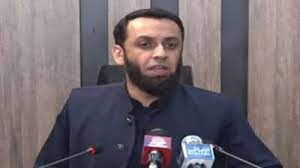 ISLAMABAD: Newly-appointed Special Assistant to Prime Minister on Interior and Law Affairs Attaullah Tarar has said that former prime minister Imran Khan did corruption of billions of rupees through Toshakhana and used fake receipts for this purpose.

While addressing a press conference in Islamabad on Friday, the special assistant said that gifts of Toshakhana cannot be sold. The gifts can be kept but they cannot be sold to anyone, he added.

While taking a jibe at Imran Khan, he said that it is very easy to say “my watch… my will”. He said that the jewelry set gifted to the wife of Imran Khan was worth more than Rs 1 billion. But Khan set the price of jewelry at Rs 5.8 million and purchased it for Rs 2.9 million.

He said that it is a tradition that the head of the country gets precious gifts but the rules and regulations of Toshakhana are clearly mentioned.

He said that another jewelry set that was gifted to the wife of former premier Imran Khan was worth Rs 3 billion but it was purchased for a few million.

He said that it is a matter of shame that the ‘watch thief’ was the prime minister of the country.