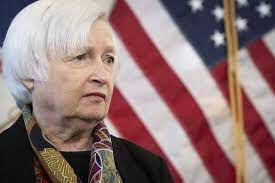 WASHINGTON: Today, U.S. Secretary of the Treasury Janet L. Yellen sent a letter to all members of Congressional leadership regarding the debt limit.

The full text of the letter can be found here and is available below.

I write to keep you apprised of actions the Treasury Department is taking in regard to the debt limit.  In my letter of January 13, 2023, I noted that Public Law 117-73 increased the statutory debt limit to a level of $31.381 trillion, and informed you that beginning on January 19, the outstanding debt of the United States was projected to reach the statutory limit.  This letter serves to notify you, pursuant to 5 U.S.C. § 8348(l)(2), of the extraordinary measures Treasury began using today.

First, I have determined that, by reason of the statutory debt limit, I will be unable to fully invest the portion of the Civil Service Retirement and Disability Fund (CSRDF) not immediately required to pay beneficiaries, and that a “debt issuance suspension period” will begin on Thursday, January 19, 2023, and last through Monday, June 5, 2023.  My predecessors have declared debt issuance suspension periods under similar circumstances.  With these determinations, the Treasury Department will suspend additional investments of amounts credited to, and redeem a portion of the investments held by, the CSRDF, as expressly authorized by law.

In addition, because the Postal Accountability and Enhancement Act of 2006 provides that investments in the Postal Service Retiree Health Benefits Fund (PSRHBF) shall be made in the same manner as investments for the CSRDF, Treasury will suspend additional investments of amounts credited to the PSRHBF.  By law, the CSRDF and the PSRHBF will be made whole once the debt limit is increased or suspended.  Federal retirees and employees will be unaffected by these actions.

As I stated in my January 13 letter, the period of time that extraordinary measures may last is subject to considerable uncertainty, including the challenges of forecasting the payments and receipts of the U.S. Government months into the future.  I respectfully urge Congress to act promptly to protect the full faith and credit of the United States.