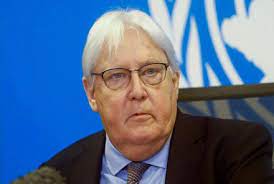 KABUL (Tolo News): Following the Islamic Emirate’s ban on female aid workers, UN aid chief Martin Griffiths will travel to Afghanistan in the coming weeks and will seek to meet with the high-ranking officials, a senior UN official said.
Ramiz Alakbarov, UN aid coordinator in Afghanistan, told a press conference as quoted by Reuters that the official of the UN will closely discuss the ban on women’s work in Afghanistan with the leaders of Kabul.
“The UN emergency and relive coordinator will conduct a visit to Afghanistan, there will be several our visits which we are planning to make at the senior level in order to prevail upon the inter locaters upon the de facto authorities side to resolve this situation and this will be taking place in the course of few coming weeks as we are assessing the implications of what is happening” Alakbarov said. Alakbarov added that women made up roughly 30% of aid workers and that they would not be replaced with men.
“Humanitarian needs of the people are absolutely enormous and it’s important that we continue to stay and deliver. As we do so, it is equally important that the rights of women and girls…are talking so much these absolutely preserved and protected,” he said. The Islamic Emirate praised the high-ranking UN official’s visit to Afghanistan and urged the United Nations to continue providing help to the Afghan people.
“It will be better if their representative visits Kabul because we will closely discuss the issues that have come up. We will jointly share thoughts to fill the gap that has been created and will resolve the issues,” said Zabiullah Mujahid, the spokesman of the Islamic Emirate. Meanwhile, Turkey’s Foreign Minister Mevlut Cavusoglu said that his country is against the recent decision of the current government of Afghanistan and that they are trying to address the issue on the sidelines of the meeting of the Organization of Islamic Cooperation.
“Unfortunately, the latest decision adopted by the Taliban cannot be accepted. We are against the isolation of women in society. This has nothing to do with Islam. We are still indeed showing a lot of efforts to reverse those decisions adopted by the Taliban,” Cavusoglu said. “This issue needs to be resolved as quickly as possible or the pause in aid will exacerbate the humanitarian crisis in the country,” said Azerakhsh Hafizi, an analyst.
The US special envoy for women, girls and human rights in Afghanistan, Rina Amiri, the international health non-governmental organization Medecins Sans Frontieres (MSF), or Doctors Without Borders, the UN Human Rights Council’s special rapporteur to Afghanistan, Richard Bennett, and EU High Representative for Foreign Affairs and Security Policy Josep Borrell criticized the recent decision by the Islamic Emirate to ban women employees in non-governmental organizations in the country.