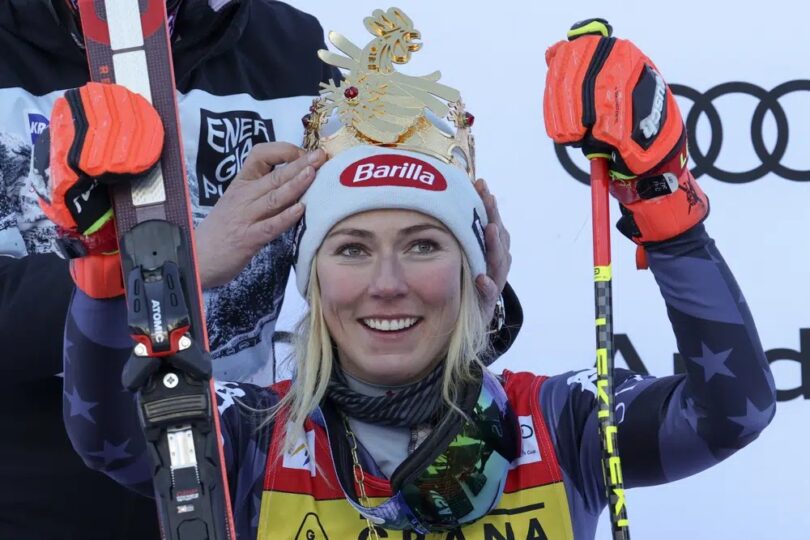 A day after securing record victory No. 83, Shiffrin added her 84th win on Wednesday in another giant slalom on the same course. And like how she did it a day earlier, Shiffrin led from start to finish, dominating the first run down the steep Erta course and then adding to her advantage in the second run.

Shiffrin finished a massive 0.82 seconds ahead of two-time Olympic silver medalist Ragnhild Mowinckel and 1.19 ahead of Olympic champion Sara Hector. When Shiffrin reached the finish after her second run, she collapsed to the snow in apparent exhaustion — with her skis still attached to her boots — before Mowinckel and Hector came over to congratulate her and help her up.

“Oh my gosh,” Shiffrin said. “I was pushing so hard and I just hoped I ended up on the right side of all the gates. Now I’m a bit dead mentally — just so tired. But when you ski like that it keeps your energy going so just an incredible feeling.” While Tuesday’s win moved Shiffrin ahead of the previous women’s mark of 82 victories held by former American teammate Lindsey Vonn, Wednesday’s victory moved her within two of the overall record — between men and women — of 86 wins held by Ingemar Stenmark.

Vonn retired four years ago when injuries cut her career short, while Stenmark raced in the 1970s and 80s. If Shiffrin wins two slaloms in Spindleruv Mlyn, Czech Republic, this weekend, she could match Stenmark on Sunday. “Technically, it is possible,” Shiffrin said with a laugh. “We’ll see if I can put the energy on my slalom skis for two more races. “It’s been busy, and I am in a kind of an unfortunate time of my monthly cycle, so I’m more tired right now. We just normalized talking about that,” she added. Spindleruv was where Shiffrin made her World Cup debut as a 15-year-old prodigy nearly 12 years ago.

“It’s a special place for me,” she said. “So I’m really looking forward to go.” Former World Cup giant slalom champion Marta Bassino was on track for the podium before she lost control a few gates from the finish and plowed through a gate, which hit her hard in the shins. It was Shiffrin’s 10th win of the season and her 19th career victory in giant slalom, moving her within one of Vreni Shneider’s record of 20 in the discipline.

Shiffrin said she had a late night after her record-breaking day. “But it was a really nice evening,” she said. “It was so nice to see messages from people and so much support and so much excitement about the race.

Still, Shiffrin managed to pull herself together in order to bring out her best skiing again.

“After yesterday, I was just so tired, which made today pretty hard,” she said. “And I felt nervous because when I am skiing tired, I make mistakes. And I didn’t want to make a mistake today.