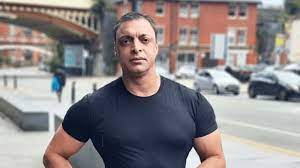 KARACHI (Monitoring Desk): Former Pakistan fast bowler Shoaib Akhtar has announced that he is no longer part of the ‘Rawalpindi Express’ movie, which was meant to be his biopic.
The movie was announced in July last year, and Akhtar at the time had expressed his excitement over the project. However, on Saturday, the former cricketer said he had parted ways with the makers of the biopic due to “constant contractual violations”.
In his tweet, Akhtar said he tried his best to keep things going but decided to disassociate himself from the “dream” project after failing to resolve disagreements.
“Very sadly, I would like to inform all of you that after careful consideration for months, I have decided to disassociate myself from the film ‘Rawalpindi Express’ and its makers by terminating the agreement through my management and legal team,” Shoaib said.
The fastest bowler also warned that he would sue the filmmakers if his name were used in the movie now.
“Severe legal action will be taken if the makers continue to make biography film[s] and use my name or life story events in any way.”
The development comes weeks after singer and actor Umair Jaswal, cast for the role of ‘Shoaib Akhtar’ in the biopic, stepped away from the project.
In his tweet on January 4, Umair said he left the movie for “creative and personal reasons.”
“Due to creative and personal reasons, I have decided to step away from the Shoaib Akhtar biopic project RAWALPINDI EXPRESS. I will no longer be associated with any media or news related to this project. Wishing everyone involved all the best.”