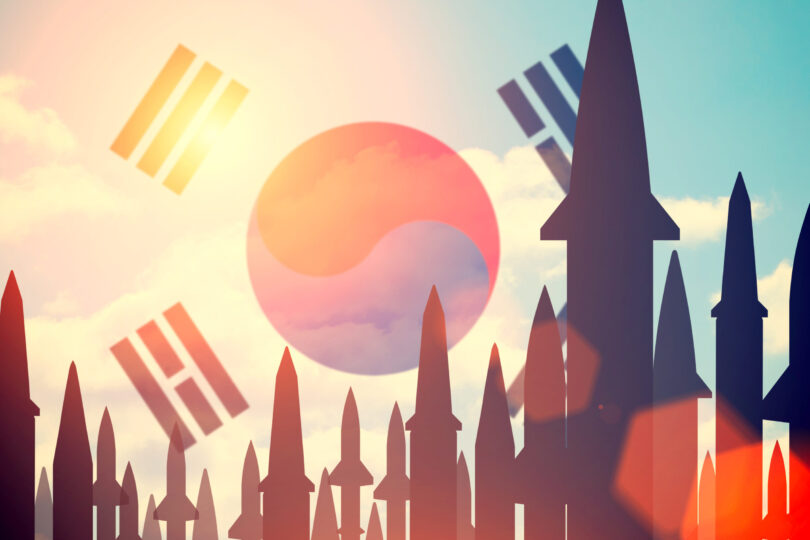 North Korean nuclear weapons are no longer the only nuclear weapons-related headache on the Korean Peninsula.
In Seoul, led by the conservative Yoon Suk-yeol administration, the calls for South Korea’s nuclear armament are growing louder. On January 11, Yoon said if North Korea’s nuclear situation becomes more serious, “we may deploy a tactical nuclear weapon here, in the Republic of Korea, or possess our own nuclear weapons,” adding “we, too, can rapidly develop our own weapon with our own technology.”
Senior members of Yoon’s party have been even more vocal. Seoul mayor Oh Se-hoon, who is on the short list for the next presidential candidate for the ruling People Power Party, said South Korea needed “an ‘active nuclear umbrella’ or its own nuclear weapons,” arguing that “a ‘passive nuclear umbrella’ that depends entirely on the will of the United States is inadequate.”
Meanwhile, Daegu mayor and former presidential candidate Hong Joon-pyo criticized the United States for continuing to pursue the denuclearization of the Korean Peninsula (which is premised on both Koreas being nuclear weapons-free,) saying Washington was being “pathetic” for holding onto a “30-year-old project that has long become impossible.”
A nuclear-armed South Korea would entail many grave consequences. Combined with the Yoon administration’s belligerence, it makes an atomic inter-Korean conflict more likely. In late December, North Korea shocked Seoul by sending five drones across the demilitarized zone, one of which entered the no-fly zone over South Korea’s Office of the President. In response to the drone incursion, Yoon said he was “prepared to expand the war,” and suggested that South Korea may scrap the September 19 Military Agreement, a key agreement from 2018 that defused the military tensions that had been escalating.
Under the agreement, the two Koreas sought to minimize the possibility of an accidental conflict by mutually disarming soldiers in the Joint Security Area, pulling back the military presence along the demilitarized zone, and refraining from conducting drills near the Armistice Line.
Without the September 19 Agreement, the two Koreas may once again walk right up to the line of conflict — both figuratively and literally — with even an inadvertent act of violence having a potential to spiral out of control.
South Korea’s nuclear armament would also upend the current regime of nuclear non-proliferation, which has gradually removed nuclear weapons from the world in the past several decades. Many East Asian nations are in a comparable situation as South Korea’s: technologically capable of developing a nuclear weapon, but refraining from doing so despite significant geopolitical threat because of the security guarantee from the United States. If Seoul forges ahead with nuclear weapons development, the decision may well encourage Japan or Taiwan to likewise pursue nuclear armament.
To prevent this result, the United States may be compelled to impose sanctions upon South Korea for violating the Nuclear Non-Proliferation Treaty (of which South Korea is a signatory,) similar to the Clinton administration’s sanctions against India in the late 1990s.
Doing so will likely be the end of the U.S.-ROK alliance, which necessarily means a fundamental rearrangement of U.S. interests in the region.
It is ill-considered and reckless for Yoon Suk-yeol and South Korea’s conservatives to call for nuclear armament while casually disregarding Seoul’s obligation under the NPT. But Washington is not without fault for letting the situation come this far. South Korea’s call for nuclear weapons is a natural outgrowth of U.S. inaction to North Korea’s nuclear program. When it comes to North Korea, the Biden administration has defaulted into “strategic patience” — at this point, little more than a euphemism for neglect — because it has no appetite to replicate Donald Trump’s showy but ultimately hollow attempt to engage with Pyongyang.
On the other hand, however, the North Korea hawks too have little to say. Their basic logic that just a little more sanctions would lead to North Korea’s collapse was critically undermined when Pyongyang managed to survive its years-long, total embargo that it imposed upon itself to prevent the spread of COVID-19.
Sharp analysts such as Ankit Panda of the Carnegie Endowment, Jeffrey Lewis of the Middlebury Institute, and Frank Aum of the United States Institute of Peace, have come to the logical conclusion: it is indisputable that North Korea is a nuclear state, and denuclearization, if it happens at all, will only happen gradually through a sustained engagement over many years.
But the U.S. government, as well as most of the Korea-related policymaking community in Washington, are slow to heed their advice. Rather than reckoning with reality, the United States is sitting on the sidelines while Pyongyang develops increasingly more sophisticated nuclear weapons and missiles. In the face of such inaction, it should not be surprising that Seoul would react by doubting the U.S. security commitment and threatening to challenge nuclear non-proliferation.
There is no need for the United States to intervene into every corner of the world. But non-interventionism does not mean an abdication from diplomacy, especially when it comes to an issue as important as nuclear weapons.
The United States needs to take an active initiative on the Korean Peninsula, by implementing a serious and realistic plan to slow North Korea’s nuclear weapons development while putting a firm stop on South Korean talks of nuclear armament by emphasizing the importance of the U.S.-ROK alliance.
If Washington fails now, the next discussion that Washington will have regarding the two Koreas may well be whether the United States should fight a nuclear war.