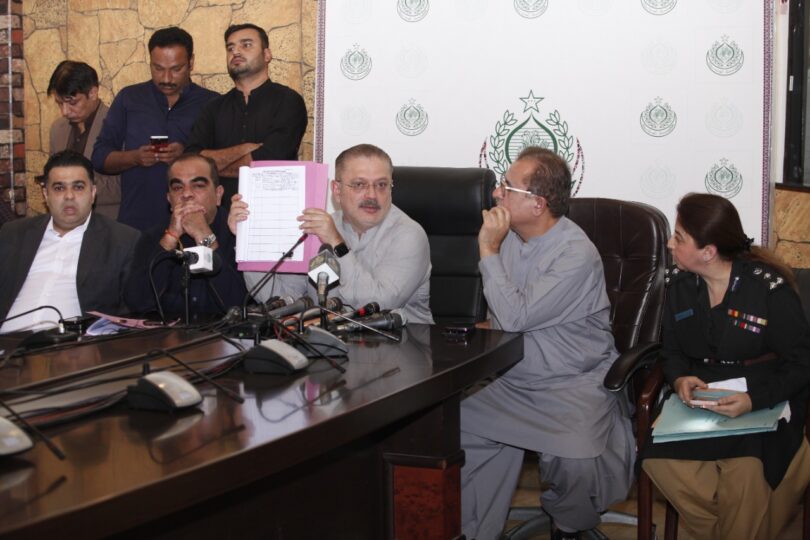 They categorically denied the athencity of it and added that the viral picture not belonged to any jail of Sindh. They added that it was said on social media that this is a picture of Landhi Jail. when they checked, it is found that it is not a picture of Landhi Jail. Then it was said that picture is of the women’s jail, but when checked in women, it is found that this picture is not even of the women’s jail. They expressed these views while holding a joint press conference at the Sindh Archives Complex on Friday. Secretary Food Department Raja Khurram Shahzad Umar and DIG Prisons Sheeba Shah were also present on this occasion.

He added that no one can be jailed without court’s orders. Provincial Information Minister said that this should not be taken in the context of their Afghan nationality, women from Nigeria, Bangladesh and other countries are also imprisoned in Sindh. The law applies to all illegal immigrants equally, he said, adding that the courts have sentenced 54 women to two-month sentences and their sentences will be completed in the first week of January, after completion of their sentences these women will be deported with the help of the federal government. Sharjeel Inam Memon said that Sindh government’s stance on illegal immigrants is clear, action is being taken against them under the laws of the country. Illegal immigrants are not allowed to buy and sell properties in any country.

He said that if illegal immigrants are involved in crimes, action will be taken against them on merit according to the law, it will not be judged on the basis of their nationality but crime history. On this occasion, videos and photos of children’s jail were also shown to the media. Sharjeel Inam Memon said that the best environment is being provided to the children in the jail. They are provided with the best food, education and health facilities . He invited the media representatives to visit the Juvenile Jail along with the Advisor to prisons today after the conclusion of press conference and show the nation and the whole of Pakistan that no one is adversely treated in the jails of Sindh.

He said that on December 9, 2022, a delegation of the National Commission for Human Rights, headed by it’s Chairperson Rabia Jawaria Agha, visited the women and children’s prison, they recorded their impression in visiter book and praised the facilities and environment provided in the children prison. On this occasion, Advisor for PrisonsAijaz Jakhrani said that the best food is being provided to the prisoners in the jails of Sindh and such precedence doesn’t exit all over the country . He said that the food which is given to the prisoners, is also served to the prison staff.

On this occasion, commenting on the supply of flour in Sindh, the Provincial Information Minister said that there is a storm of inflation in the country at the moment, the financial situation of the country is not ideal. But despite this, the Sindh government is doing its best to provide maximum relief to the people. He said that Sindh government is providing Rs 65 per kg flour to deserving families by giving subsidy of billions of rupees. He said that flour is being provided to 525000 families on a daily basis from September 15, which will continue till March. He said that those who can not afford to buy flour , can purchase atta on subsidies rates from the Sindh government stalls.

On this occasion, Provincial Food Minister Mukesh Kumar Chawla said that subsidies flour is being provided at 198 points in Karachi designated shops and through mobile stalls . He said that 500 to 600 bags of flour are available in mobile stalls every day and 125000 bags of flour are being provided to the people in Karachi every day. While , monthly 5000000 bags are made available to public. He said that 350,000 bags of flour are being provided daily in Hyderabad, Mirpokhas, Larkana and other divisions of Sindh. He added that lot of complaints were received in Hyderabad. On which the flour points have been increased to 20 in Hyderabad. He said that complaints have been received in Karachi as well, on which network of mobil atta shops is being increased in Karachi as well. The provincial food minister said that the quality of flour is excellent, if the quality was bad, why would people buy 500000 bags every day all over Sindh.
On the question regarding local bodies elections in Karachi, Sharjeel Inam Memon said that Pakistan People’s Party and Sindh government wanted that elections should held on time, we are ready for local bodies elections. He said that if new alliances are being formed, then it is a good thing, it will be fun to compete. This is not a big challenge for Pakistan People’s Party.