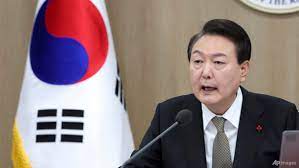 SEOUL (Reuters): South Korean President Yoon Suk-yeol said on Tuesday he would advance the creation of a military unit specialising in drones, criticising the military response to a border intrusion by North Korean drones.

Five North Korean drones crossed into South Korea on Monday, prompting Seoul to scramble fighter jets and attack helicopters, and try to shoot them down, in the first such intrusion since 2017.

The incident rekindled questions about South Korea’s air defences at a time when it is trying to rein in the North’s evolving nuclear and missile threats.

The military fired warning shots and some 100 rounds from a helicopter equipped with a machine gun, but failed to bring down any of the drones while they flew over several South Korean cities, including the capital, Seoul, for about five hours.

“The incident showed a substantial lack of our military’s preparedness and training for the past several years, and clearly confirmed the need for more intense readiness and training,” Yoon told a cabinet meeting.

Yoon blamed the lack of preparedness on his predecessor’s “dangerous” North Korea policy, which relied on Pyongyang’s “good intentions” and a 2018 inter-Korean military pact banning hostile activities in the border areas.

“We have been planning to establish a drone unit to monitor and reconnoitre major North Korean military facilities, and will now expedite the plan as much as possible,” he added, vowing to boost its surveillance and reconnaissance capability with cutting-edge stealthy drones.

The military apologised for its failure to shoot down the drones, which it said were too small to easily intercept, measuring about 3 metres (118 inches).

The military also said it could not aggressively attack them because of concerns over civilian safety, and pledged to improve anti-drone capabilities including strike assets, jamming and radar technology and regular air defence drills.

“It is regrettable we could not bring down enemy drones in a timely and efficient manner while considering public safety,” Kang Shin-chul, a senior official at the Joint Chiefs of Staff (JCS) told a briefing. “As a result, our military’s lack of preparedness has caused a lot of concern to the people.”

The incident was the latest airspace intrusion by unmanned aerial vehicles from the isolated North, with the two Koreas remaining technically at war after their 1950-53 war ended in an armistice, not a peace treaty.

Both devices were deemed crude, mounted with cameras that mostly contained images of South Korean military facilities and border regions.

The JCS said the latest drones were similar sized, but it was unclear whether they are more technically advanced.

Analysts said the drones might be too small and primitive to conduct full reconnaissance missions, but they could be enough to carry a weapon or disrupt aviation activity, as seen on Monday, when flights departing from the Incheon and Gimpo airports were suspended briefly.

“The incident caught the South’s military off guard, exposing the immaturity of its responses,” said Cha Du-hyeogn, a senior fellow at the Asan Institute for Policy Studies in Seoul. “They will need to check their GPS jamming and overall response systems.”

A 2016 report by U.N. sanctions monitors said North Korea owns about 300 drones of various types, including for reconnaissance, target practice and combat. The monitor noted that the drones recovered in the South used parts imported from China, the Czech Republic, Japan, Switzerland and the United States.

North Korean leader Kim Jong Un has publicly shown interest in drones, and pledged at a meeting of the ruling Workers’ Party last year to develop new reconnaissance drones capable of flying up to 500 km.