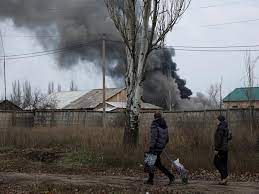 KYIV (Reuters): A drone believed to be Ukrainian penetrated hundreds of kilometers through Russian airspace, causing a deadly explosion at the main base for Moscow s strategic bombers in the latest attack to expose gaps in its air defences.

Moscow said it had shot the drone down causing it to crash at the Engels air base, where three service members were killed. Under its usual policy on incidents inside Russia, Ukraine did not comment.

The base, the main airfield for the bombers that Kyiv says Moscow has used in recent months to attack Ukrainian civilian infrastructure, is hundreds of miles from the Ukrainian frontier. The same planes are also designed to launch nuclear-capable missiles as part of Russia s long-term strategic deterrent.

A suspected drone already struck it on Dec. 5, exposing what was widely described at the time as a humiliating hole in Russia s air defences that the latest attack suggests Moscow has yet to plug.

The Russian defence ministry said in a statement no planes were damaged, but Russian and Ukrainian social media accounts said several had been destroyed. Reuters was not able to independently verify the reports.

As the war entered its 11th month, Russian President Vladimir Putin hosted leaders of other former Soviet states in St Petersburg on Monday for a summit of the Commonwealth of Independent States group, which Ukraine has long since quit.

In televised remarks, Putin made no direct reference to the war, while saying threats to the security and stability of the Eurasian region were increasing.

“Unfortunately challenges and threats in this area, especially from the outside, are only growing each year,” he said. “We also have to acknowledge unfortunately that disagreements also arise between member states of the commonwealth.”

The invasion of Ukraine has been a test of Russia s longstanding authority among other ex-Soviet states. Fighting has surged in recent months between CIS members Armenia and Azerbaijan in a conflict where Russia has peacemakers, while a border dispute has flared between Kyrgyzstan and Tajikistan. Putin said such disagreements should be resolved through “comradely help and mediating action”.

On Sunday, Putin said he was open to negotiations over Ukraine, blaming Kyiv and its Western allies for failing to engage in talks. He has shown no sign of stepping back from his demand that Ukraine recognise Moscow s armed conquest of a fifth the country. Kyiv says it will fight until Russia withdraws.

“We are ready to negotiate with everyone involved about acceptable solutions, but that is up to them – we are not the ones refusing to negotiate, they are,” Putin said in an interview on Rossiya 1 state television.

Since the invasion, Ukraine has driven Russian forces from the north, defeated them on the outskirts of the capital and forced Russian retreats in the east and south. But Moscow still controls swathes of eastern and southern land Putin claims to have annexed.

Tens of thousands of Ukrainian civilians have died in cities Russia razed to the ground, and thousands of troops on both sides have been killed, forcing Putin to call up hundreds of thousands of reservists for the first time since World War Two.

The Ukrainian military said early on Monday that Moscow had shelled dozens of towns in the Luhansk, Donetsk, Kharkiv, Kherson and Zaporizhzia regions, along the front line.

Since October, Russia has been deliberately targeting Ukraine s energy infrastructure with drones and missiles. Moscow says the aim is to degrade Kyiv s ability to fight. Ukraine says the attacks have no military purpose and are intended to harm civilians as winter sets in, a war crime.