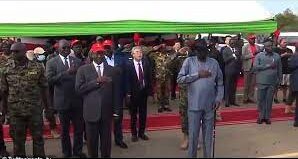 KHARTOM (Dailymail): The 71-year-old president of South Sudan has wet himself on live television while opening a new road project.

Salva Kiir Mayardit was directly in front of the cameras as a damp patch appeared down his trousers while the national anthem played.

A video shows trumpet fanfare and the celebrations during the opening of the new road.

The president appears to look down at his legs before the camera pans away from him.

The footage showed him flanked by military officials and other dignataries in the north African country.

The president is believed to suffer from a urinary tract infection, according to Sahara reporters.

Kiir has been president of South Sudan since 2011 after the country voted to become independent from the north.