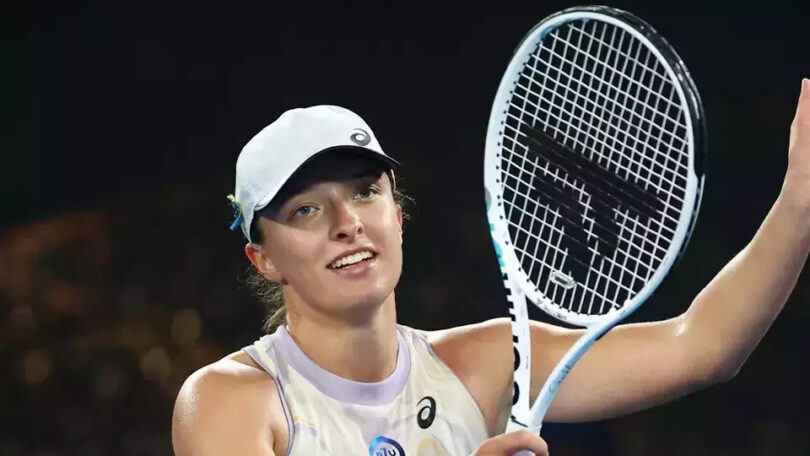 Greece’s Maria Sakkari also went through, but she looked anything but the sixth seed in a 3-6, 7-5, 6-3 struggle against Russian qualifier and college student Diana Shnaider.

Only matches on the three main stadiums, which have roofs, were able to begin on time as persistent rain compounded a scheduling backlog, with hours again lost to the conditions.

It followed intense heat then torrential rain on Tuesday, with long delays and a slew of matches called off. Swiatek said after a tough first-round test that she needed to find some extra “intensity”, and she found the spark against world number 84 Osorio.

“It was really intense physically and Camila didn’t give me many points for free, so I needed to really work for every and each of them,” she said.

The three-time major winner will face either 2019 US Open champion Bianca Andreescu of Canada or Spanish qualifier Cristina Bucsa in the third round. Pegula, who beat Swiatek at the United Cup this month, was clinical in the first set against 38th-ranked Sasnovich, but put through her paces in the second. But she was content with her performance ahead of a next round clash with Ukraine’s Marta Kostyuk or Australian Olivia Gadecki.

“My game really suits the conditions in Australia,” said Pegula. “Every tournament you want to take it one match at a time, but also have big goals.”

Third seed Stefanos Tsitsipas and seventh seed Daniil Medvedev, who was beaten in last year’s final by Nadal in a five-set thriller, are also both set to feature.

Medvedev will have to face down the home fans when he meets Australia’s John Millman. Tsitsipas, who is yet to win a major, plays another Australian in 169th-ranked Rinky Hijikata.

Among the women, American Coco Gauff and Britain’s former US Open champion Emma Raducanu meet as the future of women’s tennis goes on full display in an evening session on Rod Laver Arena.

Gauff, 18, and Raducanu, 20, have never played each other before.

The Briton has done something Gauff never has in winning a major, but the American is ranked seventh to her opponent’s 77th.

And teenager Gauff is in better form, coming off a victory in an Auckland warm-up tournament that brought her a third WTA crown. As well as patchy form, Raducanu has also suffered a string of injury niggles since she stunned the tennis world by winning the US Open in 2021 as a teenage qualifier. Gauff says the pressure is on Raducanu, who had been a doubt coming into Melbourne after yet another injury.

“Obviously she’s gone through a lot of pressure, bursting onto the scene. I feel like probably more than I have experienced coming to win a Slam,” said Gauff.
“And especially I feel like being from the UK, being the first British person to do something in a long time, probably is a lot more pressure than what I’m used to being an American.”

Danielle Collins, last year’s Australian Open runner-up, will step up her bid for a maiden major title when she meets Karolina Muchova of the Czech Republic.