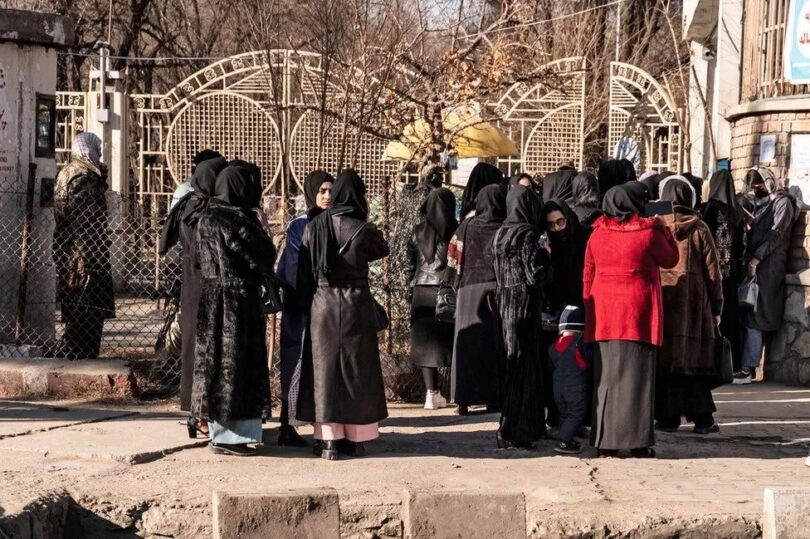 KABUL (BBC News): The Taliban have arrested five women taking part in a protest in the Afghan capital, Kabul, against the ban on women attending universities. Three journalists were also arrested. Protests are also understood to have taken place in the Takhar province.
Guards stopped hundreds of women from entering universities on Wednesday – a day after the ban was announced.
It is the latest policy restricting women’s education since the Taliban returned to power last year.
Girls have already been excluded from secondary schools.
The new ban was implemented with immediate effect by the higher education minister on Tuesday, with public and private universities ordered to bar women from attending.
The education ministry said its scholars had evaluated the university curriculum and environment, and attendance for girls would be suspended “until a suitable environment” was provided.
Footage shared on social media on Thursday showed around two dozen Afghan women dressed in hijabs marching through the streets of Kabul, raising banners and shouting slogans.
The group had initially planned to gather in front of Kabul University, the country’s largest and most prestigious educational institution, but changed location after the authorities deployed a large number of security personnel there.
A protester at the rally said “some of the girls” had been arrested by women police officers. Two were released, but several remained in custody, she added.
Some men have responded with acts of civil disobedience in solidarity with the protesters. Around 50 male university professors at public and private institutions have resigned their positions while some male students have reportedly refused to sit their exams.
The Taliban had promised a softer rule after seizing power in August 2021 following the US withdrawal from the country. However the hardline people have continued to roll back women’s rights and freedoms in the country.
Women-led protests have become increasingly rare in Afghanistan since their return. Participants risk arrest, violence and social stigma for taking part.
Prior to Tuesday’s announcement, universities had already been operating under discriminatory rules for women.
There were gender segregated entrances and classrooms, and female students could only be taught by women professors or old men.
However, women were still getting education.
The UN’s education and culture organisation, Unesco, says that the rate of female attendance in higher education increased 20 times between 2001 – the year the Taliban were ousted by the US intervention – and 2018.
Turkey, Saudi Arabia condemn Taliban’s university ban for women
Al Jazeera adds: Turkey and Saudi Arabia have strongly condemned the Taliban’s nationwide ban on women attending private and public universities.
Turkish Foreign Minister Mevlut Cavusoglu said on Thursday that the ban was “neither Islamic nor humane”.
Speaking at a joint news conference with his Yemeni counterpart, Cavusoglu urged the Taliban to reverse the decision.
“What harm is there in women’s education? What harm does it do to Afghanistan?” Cavusoglu said. “Is there an Islamic explanation? On the contrary, our religion, Islam, is not against education; on the contrary, it encourages education and science.”
The Saudi foreign ministry expressed “astonishment and regret” at Afghan women being denied a university education. In a statement late on Wednesday, the ministry said the decision was “astonishing in all Islamic countries”.
They became the latest Muslim-majority countries to do so after Qatar, which has served as a mediator between the United States and the Taliban, criticised the decision.
There has also been domestic opposition to the ban, with a dozen women staging a protest in the streets of Afghanistan’s capital, Kabul, on Thursday, chanting for freedom and equality. “All or none. Don’t be afraid. We are together,” they chanted.
Several high-profile cricketers have also condemned the decision on social media. Rashid Khan, the former captain of the national team, tweeted that women were the foundation of society. “A society that leaves its children in the hands of ignorant and illiterate women cannot expect its members to serve and work hard,” he wrote.
The Taliban retook control of the country in August 2021 after being removed from power by a US-led military coalition two decades earlier.
Afghan society, while largely traditional, had increasingly embraced the education of girls and women after the Taliban had been removed from power.
Initially, the Taliban had promised a more moderate rule respecting rights for women and minorities but has since implemented its own strict interpretation of religious law.
Since retaking power, it has banned girls from secondary education and barred women from most fields of employment. Women are also banned from parks and gyms.
The Taliban has yet to publicly comment on the ban or respond to criticism from other countries. However, a spokesman for the Ministry of Higher Education, Ziaullah Hashmi, tweeted on Thursday that a news conference will be held this week to explain its decision.
The Turkish and Saudi reactions to the ban are part of a growing chorus of international criticism.
The United Nations special rapporteur to Afghanistan stated on Wednesday that the ban was “a new low, further violating the right to equal education and deepens the erasure of women from Afghan society”.
In a video shared with The Associated Press news agency, one woman said Taliban security forces used violence to disperse a group of protesters on Thursday.
“The girls were beaten and whipped,” she said. “They also brought military women with them, whipping the girls. We ran away, some girls were arrested. I don’t know what will happen.”
Another show of support for female university students came at Nangarhar Medical University in Jalalabad. Local media reported that male students walked out in solidarity and refused to sit exams until women’s university access was reinstated.