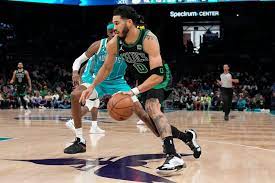 Two days after scoring 33 points against Charlotte on Saturday, Tatum once again took center stage with a commanding performance as the Eastern Conference leaders claimed a seventh straight victory.

Tatum’s virtuoso display was one of several eye-catching individual performances around the NBA on Monday, with LeBron James erupting for 48 points in the Los Angeles Lakers’ win over Houston and Golden State’s Stephen Curry scoring 41 points against Washington.

Tatum brought up his half century in the closing seconds, nervelessly draining a long-range three-pointer which drew roars of appreciation from the home crowd at Charlotte’s Spectrum Center. It was the final act of an 18-point fourth quarter from Tatum, who made 15-of-23 from the field with seven three-pointers, nine rebounds and five assists.

It marked the fifth time in Tatum’s career he has posted more than 50 points in a game. His career high remains a 60-point performance against San Antonio in 2021.

Monday’s tally also means the 24-year-old is the Celtics all-time leader in regular-season 50-point games, surpassing franchise icon Larry Bird’s total of four. “It’s been a while since I scored 50, so I needed that one,” Tatum joked after the win, adding that scoring 51 points on the national holiday to honor civil rights hero King carried added meaning. “Without him I wouldn’t be able to do what I do and live out my dream,” Tatum said. Boston’s victory saw them improve to 33-12 at the top of the East, 4.5 games clear of second-placed Brooklyn.
Elsewhere on Monday, Warriors ace Curry bagged the 67th game of his career with 40 points or more to save the Golden State Warriors with a 127-118 road win over the Washington Wizards.

The Warriors, who played in the nation’s capital a day before a scheduled White House visit in recognition of last season’s NBA championship win, looked to be sliding to defeat as Washington led 106-98 midway through the fourth quarter.

But two three-pointers from Draymond Green sparked a burst of Warriors scoring, with Curry finishing on 41 points after a closing 27-8 run. “It’s whatever it takes at this point for us to try and right the ship, and get some good momentum, good energy around the team and an understanding of how to win games on the road,” said Curry, paying tribute to the work of Green and Jordan Poole, who finished with 32 points.

“Draymond was unbelievable in the fourth quarter and Jordan kept us alive in the first half,” said Curry.

In Los Angeles, LeBron James guided the Lakers to a 140-132 win over the Houston Rockets with 48 points, eight rebounds and nine assists. But James’ heroics could not mask a shaky display from the Lakers against a Rockets side who are bottom of the Western Conference with the worst record in the NBA at 10-34.

In other games, the Memphis Grizzlies extended their winning streak to 10 games with a 136-106 drubbing of the Phoenix Suns.
Ja Morant finished with 29 points and Desmond Bane had 28 as Memphis improved to 30-13 to remain neck-and-neck with Denver at the top of the Western Conference.

Elsewhere, Milwaukee recovered from back-to-back defeats against Miami with a battling 132-119 victory over the Indiana Pacers.
Once again without Giannis Antetokounmpo, the Bucks looked to be in trouble as Indiana led by double digits in the third quarter at Milwaukee’s Fiserv Forum.

But the Bucks rallied in the fourth to outscore Indiana 39-21 to claim the win.

Jrue Holiday once again came up big for Milwaukee with a season-high 35 points.