There are few places where your morning jog or Sunday lunch plans take you to the abandoned runways and sprawling tarmac of a decommissioned airfield. But here in Berlin, Tempelhofer Feld, a 953-acre airport-turned-public park, has become a playground that embodies the city that holds it. On any given day, you might see Syrian asylum seekers playing football outside a Nazi-era terminal, bikers cycling under the shadow of an abandoned 75m radar station and families barbecuing next to grounded Cold War-era aeroplanes.

Like many places in this richly textured city, there’s much more to the site than meets the eye.

Tempelhof (as the former airport was known, and as most Berliners call the site) has played a starring role in some of Europe’s deepest horrors and greatest triumphs. It’s where the past, present and future of the city constantly converse and negotiate with each other. You go to the Brandenburg Gate or Berlin Wall to see Berlin, but you go to Tempelhof to fall in love with it.

In a city that’s always becoming and never being, there is no better place than here for travellers to feel the spirit of one of the world’s most vibrant and libertine capitals and to truly understand why people find it so addictive. 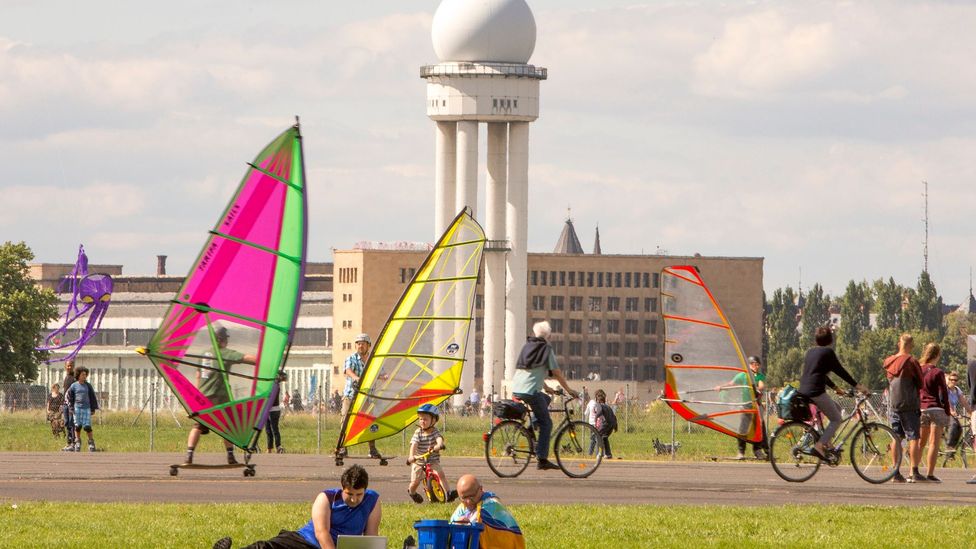 As many as 10,000 people come to Tempelhof everyday (Credit: Carsten Koall/Getty Images)

Tempelhof is so immense that its 10 entrances fall within three neighbourhoods in southern Berlin. To soak in the full scale of a space that’s twice the size of Monaco, follow Herrfurthstrasse’s cobblestones down a bustling stretch of graffiti-tagged cafes and bars to the park’s eastern entrance in the district of Neukölln. At the end of the dead-end street, the former airport’s vast, open expanse suddenly appears before you, unfurling towards the horizon. But instead of planes, it’s kite-surfers and in-line skaters flying down the runway, the mammoth terminal building shrunken in the distance.

“When I have family or friends visiting, I definitely show them this place,” said Berliner Oumi Janta. “Where else in the world do you find an abandoned or closed airport where you can just walk – or in my case, skate – around and feel freedom?”

On any given day, some 10,000 people descend on the park, creating a spontaneous neighbourhood that never feels too crowded. The park can (and does) hold every cross-section imaginable of the city’s residents, from hard-nosed Berliners and queer refugees to Turkish grandparents and harried flatmates who just want to chill out with a book.

“The space is not just like a historical site; it’s become some sort of place of entertainment, excitement,” said Lukas Staudinger, co-founder of POLIGONAL, which hosts “exploratory” walking tours of Berlin’s most architecturally significant areas. “It’s a space for sub-cultural practices. It’s a space for many different things, including for certain birds, which only nest there and nowhere else in the whole area.” 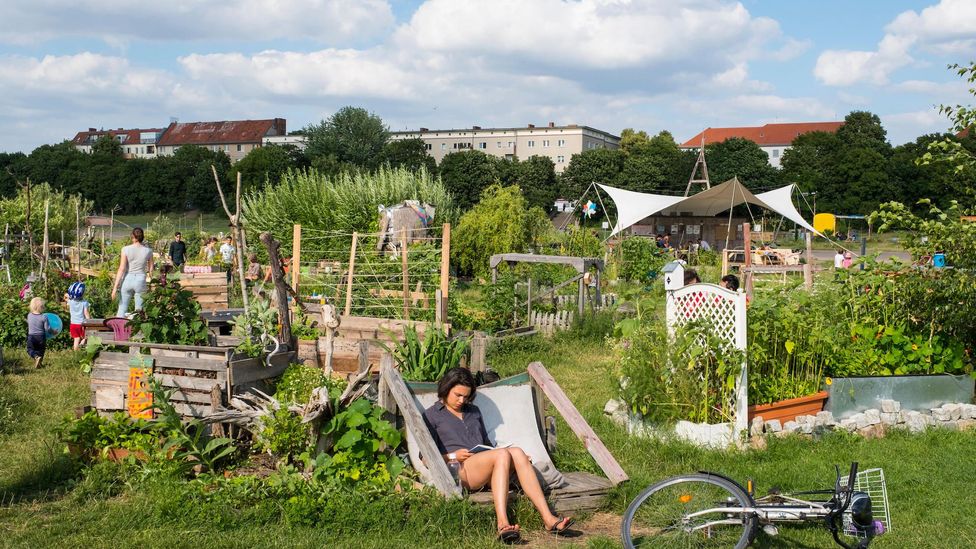 In many ways, this idea perfectly epitomises Berlin, a city synonymous with DIY creativity and cultural experimentation born from historical turbulence. People come to this city to stare Nazi Germany in the face, to touch the concrete wall that cleaved the world in two and to bask in the city’s legendary free-wheeling spirit and anything-goes attitude. More than anywhere else in Berlin, these elements collide in a tangible way at Tempelhof.

As you walk along the runway from the Herrfurthstrasse entrance towards the terminal, you’ll spot community gardens to your left with improvised sculptures built from recycled materials, a circus school abutting an artists’ workspace and a biergarten to your right. Closer to the terminal, an 18-piece interactive art installation doubles as a mini-golf course. Round the 4.3-mile loop and you’re likely to see people downing pilsners in the re-wilded meadow and unicyclists plying the runway.

“The vastness of the site… produces an almost overwhelming sense of space,” reads a city brochure. “The effect is liberating; the independent citizen becomes a creative explorer once again.”

Janta wouldn’t be who she is today without Tempelhof, as the site’s sheer size gave her room to move and the confidence to dance on wheels. This is essentially the story of modern Berlin. Ever since Berliners swarmed the Wall with sledgehammers in 1989 and the world watched as people high on freedom danced in the street, the city’s boundless space, history of comparatively cheap rent, and live-and-let-live ethos has inspired a flurry of artistic improvisation and lured young people eager for room to play. 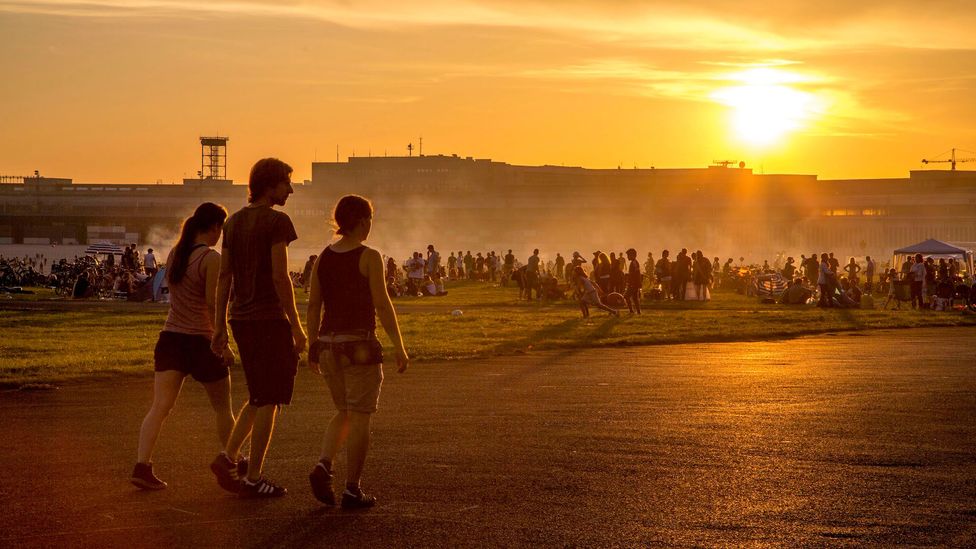 No other site captures Berlin’s sense of freedom born from historical turbulence quite like Tempelhof (Credit: Carsten Koall/Getty Images)

“Back in my 20s when I started roller skating, I used to live near the Tempelhofer Feld, which made it extremely convenient to just go there and skate whenever I wanted to,” said Janta, who was born in Senegal and has lived in Berlin nearly all her life. She’s now a professional roller skater and model, with almost one million followers on Instagram watching her moves at Tempelhof. “As soon as I feel the smooth pavement of the Tempelhofer Feld under my feet, it’s like the cherry on the cake of skating.”

The story of how this airport came to be a park reveals a lot about Berlin. The last plane landed here in 2008, and almost as soon as it became public greenspace in 2010, developers salivated at the prospect of turning such a prime piece of real estate into luxury housing. But Berlin is a city that bristles at anything reeking too strongly of capitalistic development. This is a place that ran Google out of town in 2018 amid fears of gentrification and proposed a five-year rent cap to preserve its “poor but sexy” image. So when the city placed the future of the site to a public vote in 2014, as many as 90% of residents in some districts voted to protect their new greenspace.

Tempelhof’s transformation into a public gathering space may be a recent one, but it’s actually a return to its deepest roots. And if you keep your eyes open as you explore, you can see each chapter of its history.

In the 1700s and 1800s, Tempelhof served as a parade grounds, and gazing out on the meadow that’s left unmowed to attract bees, it’s easy to imagine Berliners flocking to picnic and watch moustachioed Weimar-era soldiers marching in step as their brass instruments glinted in the sun. This flat, grassy expanse is also where some of the world’s first pilots tested their aeroplane prototypes – including Orville Wright, who embarked on a record-setting one-hour flight from Tempelhof’s lawn in 1909. 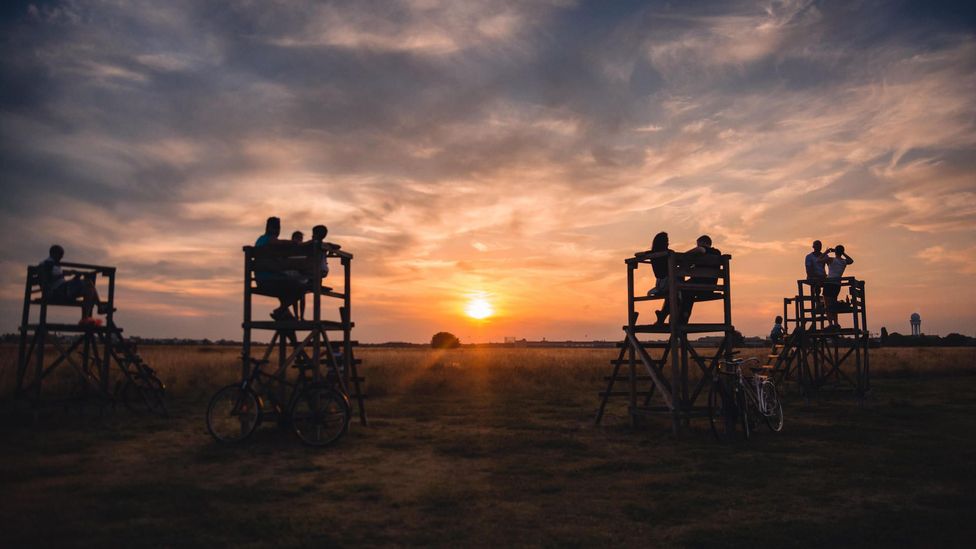 Some of the world’s first planes took off from Templehof’s meadow (Credit: LG Photo/Alamy)

The runway that’s now mobbed with wind-karters and joggers took shape in 1923 when Tempelhof opened as the first civilian airport in Europe. Then, of course, came the Nazis, and if you push past the tarmac towards the hulking, crescent-shaped terminal, you’ll see why British architect Norman Foster once dubbed Tempelhof “the mother of all airports”. Designed as a sprawling testament to Nazi ambition, the airport was to be a centrepiece of Hitler’s planned world capital of Germania, a glorious Aryan utopia built on the rubble of impure Berlin. The central terminal building stretches 1.2m – a length that once placed it among the 20 largest buildings on Earth. (Ironically, it was also once home to the world’s smallest duty-free shop.) Guided tours reveal just how little the airport’s interior has changed and are a flashback to the golden age of air travel, with its retro check-in desks, analog clocks and neon signs.

After World War Two, Tempelhof was located in US-controlled West Berlin, a political island surrounded by East Germany that would be choked off by a Soviet blockade in June 1948, which cut off access to supplies for West Berliners. With road, water and rail routes into the west side of the city blocked, Tempelhof soon became the site of a truly extraordinary military operation: the Berlin Airlift. For 322 days, an Allied supply plane took off or landed at Tempelhof every 45 seconds, delivering a total of 2.3 million tons of food and fuel to save two million West Berliners from starvation in what was considered the largest humanitarian operation in history.

Today, if you follow a dirt path from the north side of the runway that carried people like Dr Martin Luther King Jr and President John F Kennedy to Berlin during the Cold War, you can find the last aeroplane at Tempelhof: a Douglas Skytrain C-47 used during the Berlin Airlift.

“Every aspect of the history of Tempelhof you can see there; you can really go there and see why this place in this period of time was so important for the city and also actually for the world,” said Diego Cadenas, a volunteer with the advocacy group 100% Tempelhofer Feld. 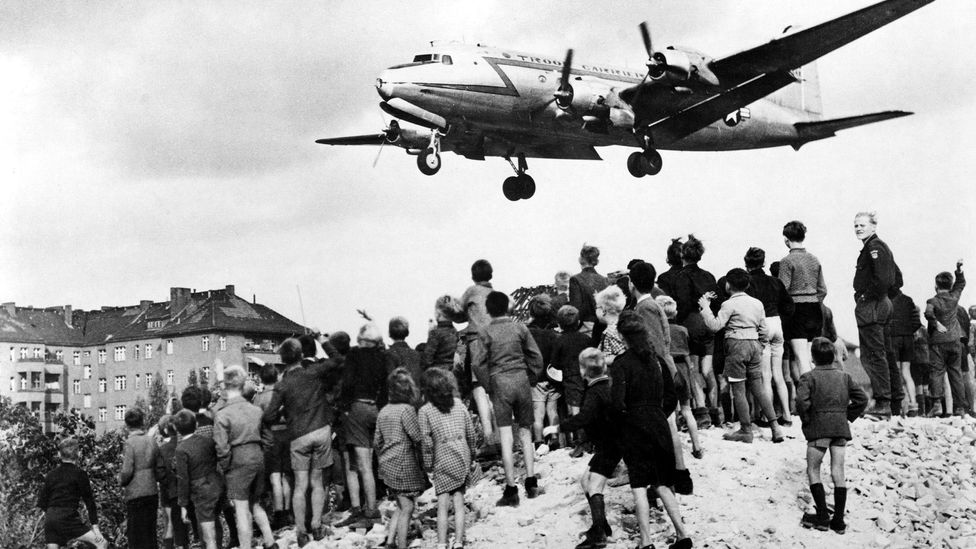 In a twist of irony, decades after Tempelhof was conceived by the Nazis, the airport reprised its Cold War role as a lifeline for those in need by becoming Europe’s biggest refugee camp.

Beginning in 2015, the terminal and some of its grounds were used to house Syrian refugees, with more than 2,000 sleeping under the hangars’ 52ft-high ceilings at one point. Today, a “container village” near the runway is housing several hundred Ukrainian refugees. And in the depths of the Covid-19 pandemic, the airport’s grounds became a vaccination site – a role reminiscent of its brief life as a field hospital during the 19th-Century’s Franco-Prussian War.

“[It’s] a particularly special place because how much history it holds,” said Cindy Brzostowski, an American journalist living in Berlin. “All it takes is a look down to remember that you’re on a runway with years and years’ worth of stories.”

Like the city that surrounds it, Tempelhof continues to shift its identity, providing an inclusive space for Berliners old, new or just passing through.

“Skating [here] is always a great feeling,” said Janta. “Even though I’m used to it, every time it feels like a new experience. Every time I hit the pavement, I just take deep breath and enjoy this feeling, almost like butter on the skin.”