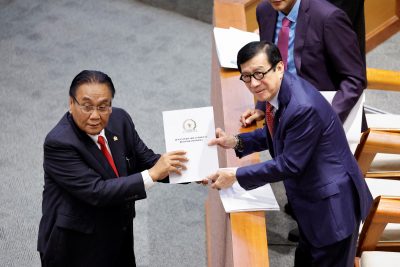 The calendar will tell you that Indonesia’s presidential election is due in February 2024 — but make no mistake, Southeast Asia’s biggest democracy is firmly in election season already. Party coalitions are manoeuvring to form presidential tickets by a November deadline and, buoyed by resilient app-roval ratings, President Joko Widodo (Jokowi) is keen for his legacy to be carried forward by a friendly successor.
Indonesia had been basking in its successes in 2022, with the economy bouncing back better than expected from the pandemic — the World Bank predicts annual GDP growth of 5.2 per cent — and a diplomatic triumph in its chairmanship of the G20. The November leade-rs’ Summit in Bali capped a G20 whose outcomes greatly exceeded expectations in a year in which its membership was divided on big iss-ues, notably over the Russ-ian invasion of Ukraine.
But the PR bubble was burst by the enactment of a regressive new criminal co-de, the latest milestone alo-ng the road to illiberalisation of Indonesian politics that gained momentum during the Jokowi years. The c-ode satisfies a range of conservative agendas: Islami-sts’ desire to police morality and the obsession of bure-aucrats and nationalist politicians with protecting the ‘dignity’ of the state and its officials.
Despite the setbacks, the dynamism of electoral politics is alive and well, altho-ugh some of the President’s supporters are still pushing a long-shot bid for a constitutional amendment to extend his term beyond 2024. Polling shows a consolidation of support around the ‘big three’ potential candidates: Central Java Gove-rnor and Jokowi favourite Ganjar Pranowo, who sha-res with the President an affiliation with the nationalist PDI-P party; former Jakarta governor and education minister Anies Basw-edan; and Defence Minister Prabowo Subianto, who bu-rnt his bridges with the opp-osition when he joined Jok-owi’s cabinet after losing to him in the 2019 elections.
None of these men herald radical policy change — even Anies, who despite his status as the de facto opposition candidate has been careful not to play the anti-government card too stridently. All would stick more or less to the formula that has kept Jokowi popular: courting foreign investment within a broadly nati-onalist economic framewo-rk; hedging between China, the United States and Japan on geopolitics; and building out the social safety net.
A post-Jokowi reversal of regressive political trends doesn’t seem likely either. Barring any radical constitutional change ahead of 2024, Indonesia will remain a democracy — albeit a weaker and more illiberal one, where dissent is anathematised and the rights of unpopular minorities, such as LGBT people, are subject to the whims of the majority. The new criminal code introduces added risks for LGBT Indonesi-ans, for example, but contains no explicit ban on same-sex relations. Islami-sts are already decrying this ‘failure’ and there’s no reason to assume that an outright ban on gay sex might not be around the corner.
The tradition of the overbearing executive resurrected by Jokowi will likely continue, too. Indonesian parties and presidential candidates will continue to fight it out in basically free and fair elections. But once they win they will consider it their prerogative to browbeat opponents and enjoy deference from a rubber-stamp legislature kept sweet by patronage and a media whose corporate owners ne-ed to keep the government on-side to ensure favou-rable regulatory treatment.
All this offers food for thought for countries in the west, such as Australia, as the political and cultural gulf seems to grow at a time when the importance of Indonesia to their strategic interests in Asia becomes more pressing.
Australia’s Foreign Minister Penny Wong is fond of saying that Australia needs to face the region as it is, rather than as we might want it to be. On China in particular, generations of Australians have absorbed a pragmatic narrative propagated by our leaders — the short version of which is that while we as citizens of a democracy might find the Chinese political system unacceptable, there are ultimately common economic and other interests to be pursued in spite of this.
By contrast, after the end of the Suharto era, the idea of shared democratic values as a buttress of relations with Indonesia has been a relatively easy sell, especially once the election of Susilo Bambang Yudhoyono in 2004 capped Indonesia’s democratic transition and confirmed the viability of moderate, technocratic politics.
But as Indonesia’s dem-ocracy displays its more illiberal face, the rhetoric of shared democratic values is a declining currency.
Downplaying values and playing up interests doesn’t just mean interests in the sense of what Australia can achieve in Indonesia, commercially or otherwise. It means focusing instead on what Australia can achieve with Indonesia, as a fellow middle power with overlapping interests in respecting and reinforcing the rules of global trade and pursuing multilateral cooperation on transnational policy challenges.
Australia is notable among its liberal-democratic political brethren in the extent to which it finds a compelling congruence of economic and strategic interests — in an open, rules-based trading system and avoiding the entrenchment of a cold war dynamic in Asia — among the largely undemocratic states in our immediate region.
Indonesia may have seemed the lucky exception, the Southeast Asian heavyweight with whom Australian leaders could engage without the whiff of dictatorship hanging over proceedings. With Indonesia drifting in the global tide of illiberal politics and the Australian media drawn to the bad-news stories that this inevitably gives rise to, refreshing the rhetorical scaffolding of the bilateral relationship is once more a pressing task.