Not far from the wide, sun-drenched beaches of Carnac in France’s north-western Brittany region, I stood and looked out at the endless rows of standing stones that make up the Alignements de Carnac (Carnac Alignments). The tall, roughly hewn stones were divided into symmetrical, evenly spaced columns that disappeared into the distance, and I could see how the local legend of Saint Cornély had arisen.

Supposedly, Saint Cornély (the patron saint of cattle), pursued by a legion of Roman soldiers and finding no other means of escape, had hidden in the ear of an ox and turned the legionnaires to stone. Needless to say, this isn’t the true origin of the Alignments. Aside from the unlikely transfiguration, the standing stones predate the Roman Empire by at least 3,000 years. But in a superstitious time, this was probably a plausible explanation for a mystery that baffles experts to this day. 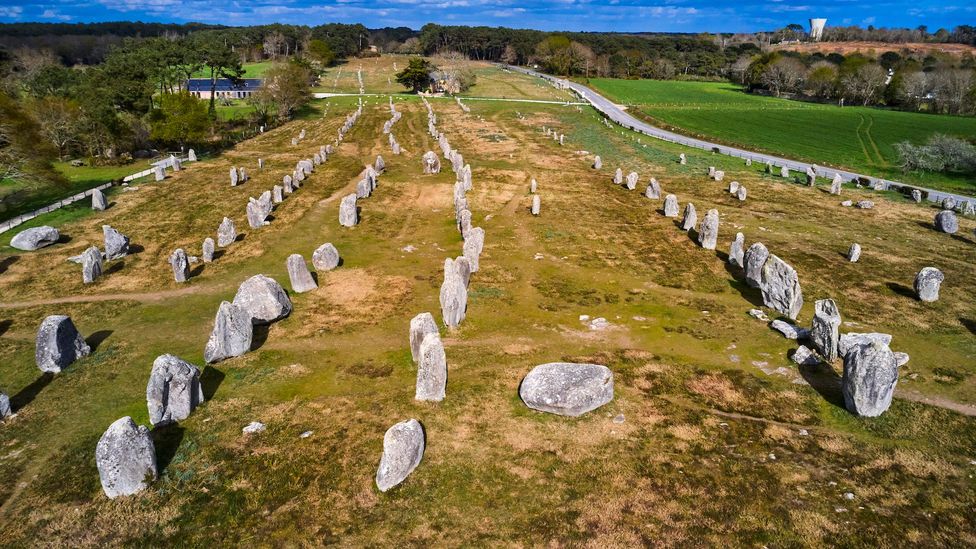 Stretching 4km along the coast of Brittany and consisting of more than 3,000 menhirs (man-made, often tapered, stones erected in prehistoric times across Western Europe – not unlike those Obelix from the Asterix comics made a career sculpting and delivering), the Carnac Alignments represent the largest group of man-made standing stones in the world. Like Stonehenge, their purpose, what they represent and who placed them are mysteries shrouded in theory and legend. Yet, their place as one of the most important sites of European prehistory is undisputed.

Radiocarbon dating has determined that the granite menhirs were erected by a Neolithic community around 6,000 years ago (about 1,000 years before Stonehenge). The stones range in size from 0.5m tall to the hulking Giant of Manio, which soars 6m, with an average-sized menhir weighing between five and 10 tonnes. They were generally quarried from the bedrock that lies close to the surface of the site and hauled and erected using pulleys and brute strength. Given the superhuman effort needed to create them, the Alignments would have held enormous significance, but the site’s administrator, Olivier Agogué, believes that true purpose of the Alignments will likely remain unknown.

“There are plenty of interesting theories, some with examples that seem to fit in certain circumstances, but there’s always more to disprove them than to prove them,” he told me. “The Carnac Alignments are not straight, they meander and follow a ridge that separates the coastal plain from the interior, land-based world, likely acting as a kind of symbolic border between the two. Of course, it did not prevent people from passing between them, but it marks a geographical separation between land and sea that isn’t random.” Kneeling next to a menhir with serpentine carvings at its base that sparked its own set of theories, he added, “But, its ceremonial or religious significance is open to interpretation.”

Given this open pool of conjecture, it’s unsurprising that myths and legends swept in to fill the void. Stories of goblin-like creatures called Korrigans, or of stone soldiers going to drink from a stream on Christmas Eve and crushing anyone in their path may sound like dark fairy tales, but these early attempts to explain the unknown created a sense of awe that has helped preserve the site. 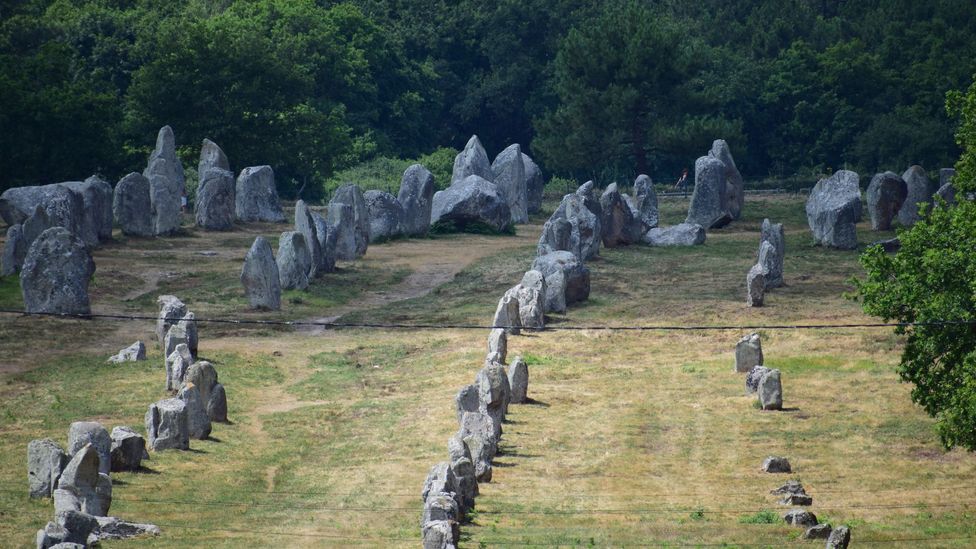 The stones range in size from 0.5m tall to 6m, with an average-sized menhir weighing between five and 10 tonnes (Credit: Michiel Tebbes/EyeEm/Getty Images)

“The idea [of menhirs representing soldiers] extends to Celtic heroes defeated on the battlefield,” explained Wendy Mewes, the author of many books about the landscape, history and legends of Brittany. She added that parallels between the legend of Saint Cornély and longstanding Breton mythology still resonate today. “Not far away in Quiberon, a menhir has been used for the ‘modern’ war memorial.”

The Carnac Alignments are made up of several distinct sections of standing stones, now divided by land, trees or roads – although there are theories they were once unbroken. The most famous of these sections are called Le Menéc, Kermario and Kerlescan, which are also the best-preserved examples of these long lines of menhirs. However, there are also a number of dolmen (stone burial chambers), some of which predate the menhirs and combine to make this an extraordinarily dense megalithic site.

The area covered by the Carnac Alignments is too big to truly appreciate from ground level. To gain a greater perspective, Agogué took me to another of the area’s most interesting features, roughly 1.5km from the rows of stones. The Saint-Michel tumulus, a huge, grass-covered mound that looms over Carnac, is the largest grave mound in continental Europe, built roughly 6,700 years ago. We walked through the dark, cramped passages and chambers within the tumulus itself, which are currently closed to the public, and Agogué pointed out where valuable relics, including polished stone axes and items originating from Italy and Spain, were found. Due to the corrosive acidity of the soil, very few artefacts have been found at Carnac outside burial tombs. 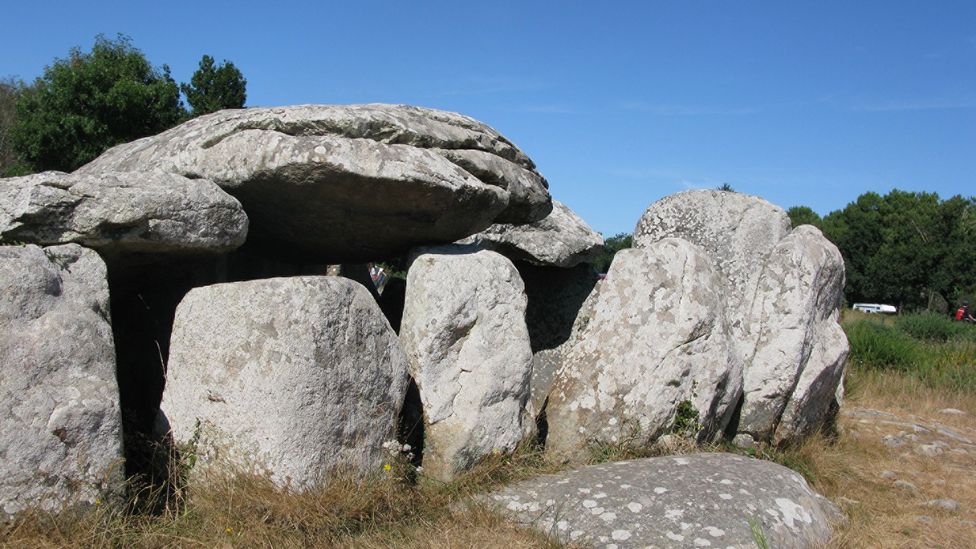 The site also has a number of stone burial chambers called dolmen that predate the menhirs (Credit: Hugh Tucker)

Standing on top of the tumulus, the countryside fanned out into the distance and the huge scale of the Alignments, one of the world’s largest Neolithic monuments, became clear. Covering an area of 40 hectares, the fields of stones stretched further than I could see. It seemed unbelievable that thousands of menhirs weighing several tonnes each were quarried, moved and erected in an age when stone tools were the height of technology.

Walking back through the menhirs, Agogué explained while the Alignments are reasonably well preserved, both nature and humans have altered the appearance of the site over time. When the Alignments were constructed, the landscape would have been open, without the trees that now divide and flank the sections, and the sea would have been further away. And in the past 6,000 years, some of the menhirs have toppled over – including one last year.

Humans have altered the site in other ways. As we moved between the stones, Agogué pointed to three deep gashes in one of the mammoth menhirs, indicating cuts made with modern tools, and explained that they have been used as local building materials, including, supposedly, in the construction of the lighthouse on the nearby island of Belle Île.

The changes to the stones and site isn’t just a modern phenomenon. “It’s a place of life,” Agogué said, as the site has been constantly evolving. Some of the later Neolithic dolmens were even built using stones placed hundreds of years before in other parts of the Alignments. With roads that now snake between the fields and the buildings that stand among them, the site’s original architects might struggle to recognise their creation if they saw it today. 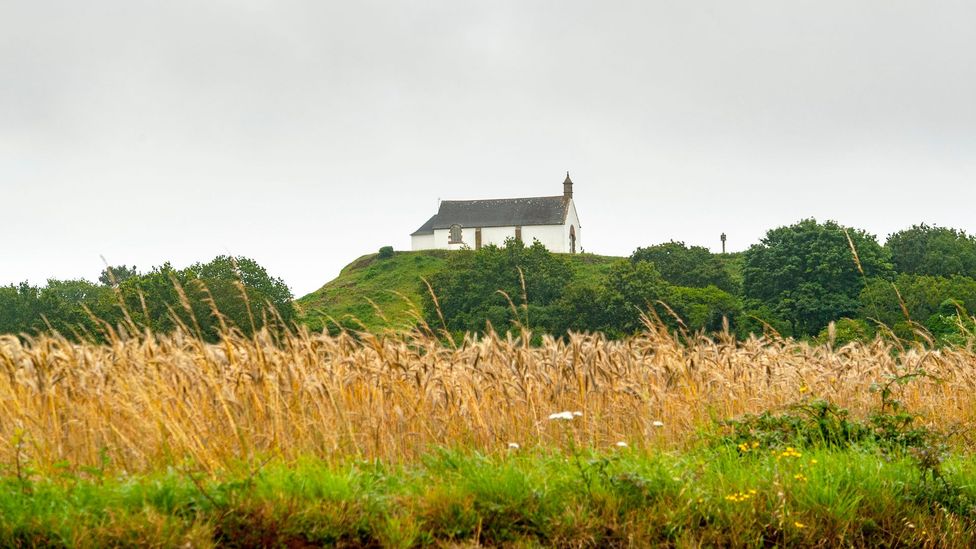 The first serious excavations at Carnac took place in the 1870s by Scottish archaeologist James Miln, who recorded the positions and details of the menhirs and also discovered many artefacts inside the dolmen. Miln’s work was continued by his apprentice, Zacharie Le Rouzic, who began to restore the stones, re-erecting and marking those that had fallen. Miln and Le Rouzic’s efforts laid the groundwork for the Alignments to be recognised and protected by the state, but with this recognition came increased popularity.

Because of their historical significance and breathtaking scale, the Alignments have attracted tourists for hundreds of years. However, as visitor numbers swelled in the 20th Century to levels that threatened to damage the site, a project aimed at restricting public access was initiated in 1990 to provide educational resources and safeguard the stones. Because of concerns about conservation, free access to the stones is only allowed in winter. However, not everyone agrees that this is the right approach for the future of the site.

The Menhirs Libres (Free Menhirs) is a Carnac-based group that states they advocate for the wishes of the local residents. Concerned about the commercialisation of the site and the implications more visitors may have, a spokesperson said, “The campaigns to attract visitors focus on the dream, the mystery, the beauty of the site without visitors at sunrise or sunset. The photos and videos never show the reality of overcrowding in summer with traffic jams on the roads and cars parking anywhere possible.” The group believes that with better organisation, the flow of tourists could be managed between the different sections of the Alignments to avoid high concentrations in particular areas.

Regardless of the site’s future management, the Alignments stand as a monument to human inspiration and ability. With technology now at our fingertips, there are few things that can’t be found with our phones. But here, on this stretch of remote French coastline, it’s refreshing to be presented with a genuine mystery that has persevered for millennia.