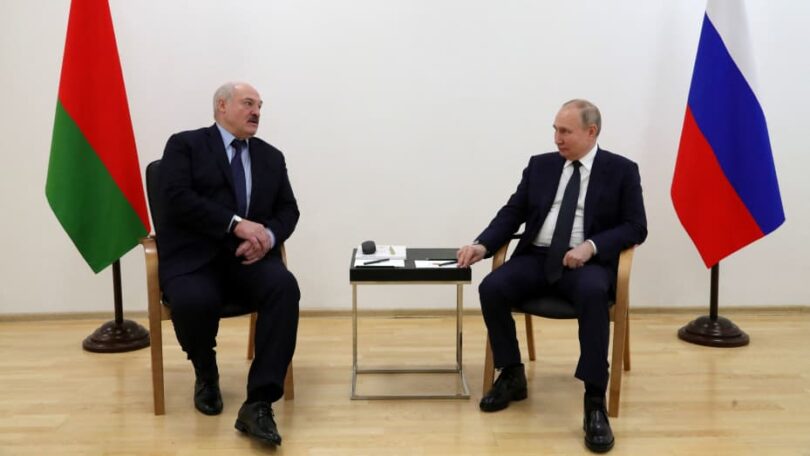 Throughout the past year, the West thre-atened Moscow wi-th complete isolation, economic collapse and oblivion. However, state relat-ions with neighbors either did not undergo drastic c-hanges or improved. Ab-out what awaits the post-Soviet space in 2023.
Union state
In 2022, Belarus was Russia’s most consistent ally. Firstly, Alexander Lukashenko provided the territory for launching an offensive by Russian troops on Kyiv and launching missile strikes. Secondly, international sanctions did not freeze the integration process between Moscow and Minsk, but, on the contrary, spurred it on.
In mid-October, Lukashenko said that Vladimir Zelensky was preparing an attack on Belarus. For this reason, within the framework of the Union State, a regional 9,000-strong group of troops was created to protect the Belarusian borders. “Tell the president of Ukraine and other insane people that the Crimean bridge will seem like flowers to them if they touch at least one meter of our territory with their dirty hands,” the head of the republic said. However, the country’s Ministry of Defense emphasized that the regional grouping is an exclusively defensive project.
As for the economy, in November the Belarusians promised to supply Russia with up to 100,000 tons of diesel and up to 50,000 tons of gasoline every month. In addition, according to State Secretary of the Union State Dmitry Mezentsev, the parties have done a lot of work on the convergence of national legislation for economic integration.
28 joint programs have been developed. According to the Prime Minister of Belarus Roman Golovchenko, half has already been implemented. He stressed that over the past year there have been no dairy, gas, meat or any trade wars between Moscow and Minsk. Instead, Belarusians increased their share of the Russian market by about 30 percent. As Golovchenko clarified, Minsk redirected to the ally those goods that used to go to Europe, but now fell under sanctions.
In addition, the authorities of the Vitebsk region are negotiating economic cooperation with the Crimea. In July, they signed a protocol of intent for cooperation between the Council of Ministers of the peninsula and the Vitebsk Regional Executive Committee. In October, the same agreement was signed by regional free economic zones. The head of the Crimea, Sergei Aksyonov, offers Belarus to use the Crimean ports as the southern sea gates of the EAEU.
Turn to Center
At the end of November, Kassym-Zhomart Tokayev was re-elected to the post of President of Kazakhstan and immediately after that flew to Moscow for negotiations with Vladimir Putin. According to the Kazakh leader, by doing so he wanted to emphasize the importance of the northern neighbor for his country.
According to the Ministry of National Economy of Kazakhstan, by that time, since the beginning of the year, the republic had increased the supply of goods to Russia by 15.1 percent. At the same time, in 2021, the product range was 640 items, and in 2022 – 1,057. In the first half of the year, Moscow increased direct investment in Kazakhstan by a third, to $938 million.
In turn, Putin proposed to Tokayev to create a gas union, which, in addition to Russia and Kazakhstan, could include Uzbekistan. Since Western countries decided to abandon Russian energy resources, Moscow began to reorient itself to other regions. Both republics of Central Asia are experiencing a shortage of gas and are likely to be interested in deliveries of Russian fuel. In the future, gas can be brought from Uzbekistan through Afgh-anistan and Pakistan to In-dia. Turkmenistan has been trying to implement a similar project worth ten billion dollars for seven years.
In addition, Russia is ready to build nuclear power plants in Kyrgyzstan, Kazakhstan and Uzbekistan. Rosatom will not only build the facilities, but will also increase the competence of local specialists so that they independently provide for the entire work cycle. Nuclear power plants should fully compensate for the lack of electricity in Central Asia. For example, in Tashkent they hope to receive nuclear energy in 2028 – the terms of reference have already been signed with Rostatom. Astana is still choosing between Russia, France and South Korea, but admits that the offer of an ally in the EEU and the CSTO is more profitable, since Mo-scow agrees to remove and dispose of nuclear waste.
Eurasian project
The heart of the Eurasian integration with the participation of Russia is the EAEU, so it is not surprising that in 2022 Moscow showed an increased interest in this organization. In particular, we decided to launch a five-year pilot project for the financial support of industrial cooperation, in which at least three countries of the union will participate. From 20 to 30 million dollars can be allocated to subsidize interest rates on loans.
Support for cooperation within the EAEU should help its members to establish their own technological development. First of all, Russia will benefit from this, because within the union there is no alternative to its technologies.
One of the first projects may be the development of an interstate program for the development of the semiconductor industry. The main problem is that there are almost no enterprises in the EAEU countries that are ready to produce the necessary products. The Ministry of Industry and Trade of Russia notes the 15-year lag of the domestic industry from world leaders. However, Chairman of the Eurasian Economic Commission (EEC) Mikhail Myasnikovich is confident that in the future semiconductors will become a symbol of the success of Eurasian integration.
In addition to this, the EEC proposes to create a universal payment system. Moreover, both EAEU members and the BRICS countries will be able to participate in it, primarily India and China, which, with the right approach, can replace all of Moscow’s former partners in the West. But even if this fails, by 2025 the leaders of the EAEU promise to form a common financial market.
By that time, the single gas market should be operational. As Lukashenka said, Belarus wants everyone within the union to pay the same price for fuel, even if it equals European indicators.