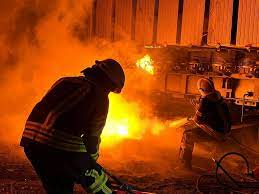 MOSCOW (Agencies): Two people died and five others were injured in a major fire that engulfed an oil refinery in eastern Siberia on Thursday, authorities said.

In recent months Russia has seen a series of unusually frequent blazes ripping through shopping malls, factories and other facilities.

In the latest incident, an oil refinery in the eastern Siberian city of Angarsk caught fire at around 6:00 am local time, authorities said.

Igor Kobzev, the governor of the Irkutsk region where the city is located, said that two people died and five more were injured, one of whom was hospitalized.

Citing the emergencies ministry, he said on messaging app Telegram that the fire was thought to have been caused by “gas contamination.”

Investigators opened a criminal probe into a violation of industrial safety regulations.