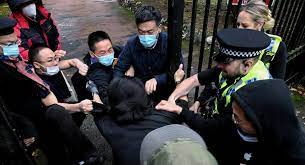 LONDON (Reuters): China has removed six diplomats from the UK, including its consul-general in Manchester, after they were accused of assaulting a Hong Kong protester in the northern English city, Britain said Wednesday.

UK Foreign Secretary James Cleverly said the six envoys had left the country by a Wednesday deadline imposed by London for them to waive their diplomatic immunity and be questioned by police over the October incident.

Greater Manchester Police launched a criminal probe after Hong Konger Bob Chan alleged Chinese diplomats subjected him to “barbaric” treatment — dragging him inside their compound to assault him — at an anti-Beijing protest.

“As part of that investigation, we requested that six Chinese officials waive diplomatic immunity so they can be questioned,” Cleverly said Wednesday.

He added that the Chinese embassy in London had been informed of the deadline for “them to take action.”

“In response to our requests, the Chinese government has now removed from the UK those officials, including the consul-general himself,” Cleverly noted.

Britain’s top diplomat said London’s response demonstrated its “adherence to the rule of law” as well as “the seriousness with which we take these incidents.”

In response, China’s embassy to Britain issued a rebuke to Cleverly on Wednesday, saying he made “irresponsible comments by distorting facts.”

“The British government failed to effectively prevent the intrusion and assault carried out by those rioters and to protect the premises and members of the Chinese Consulate General,” the Chinese embassy said in a statement posted on its website.

“The UK side shows no respect for justice and the rule of law, and is being most irresponsible and disgraceful,” it said, adding that they had “launched solemn representations” with Britain over the issue.

In October, the UK’s Foreign Office department summoned Yang Xiaoguang, China’s Charge d’Affaires in London, after footage emerged backing up the claims of the pro-democracy protester.

Senior ruling Conservative lawmakers had accused consul-general Zheng Xiyuan, one of China’s most senior UK diplomats, of being at the Manchester scene and ripping down posters during the peaceful protest.

The removal of the six Chinese envoys is likely to please hard-liners on China in the Conservative party, who had demanded their expulsions and accused the UK government of appeasing Beijing.

“The Foreign Office must now declare those who have fled persona non grata, and make clear they are never again welcome in the UK,” she added in a statement.