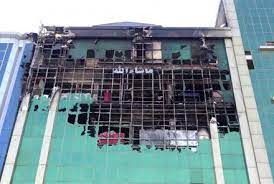 KABUL (TOLOnews): Two separate fires started in Kabul, inflicting heavy financial losses on shopkeepers and residents.
A fire broke out in a market in PD 11 of Kabul. The market contained many gold and jewelry merchants.
The Kabul department of security said four gold shops were damaged in the fire.
“The fire which took place due to an explosion of a gas balloon in the market burned four gold factories and the owners suffered 500,000 Afs,” said Khalid Zadran, a spokesman for the Kabul Department of Security.
According to the people working in the gold shop in Karta-e-Naw in PD 11 of Kabul, the scene of the fire, the fire burned many of the tools and other objects in the shops.
“All the instruments that we used have been destroyed. Nothing remains here and other instruments are not useful,” said Sayed Ishaq Rahmani, the owner of the shop.
“I have lost between $100,000 and $120,000. This was not all of my property but some of my friends had a share in it,” said Muzamil, a worker at the factory.
Officials of the Amini Market called on the government to take serious actions to prevent future fires.
“Our government provides the help on time, but we wish the government would give us access to resources to prevent fires,” said Sayed Masoud Joshan, in charge of the market’s administrative affairs.
Another fire occurred in PD 9 of Kabul, which also caused financial damage to residents.
The fire took place at a military facility related to the Ministry of Interior.