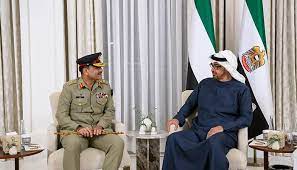 At the beginning of the meeting, which was held at Qasr Al Shati Palace, UAE President Sheikh Mohamed congratulated General Asim Munir on his appointment as Pakistan’s chief of army staff, wishing him luck in his new duties to serve his country and people.

For his part, General Asim Munir expressed his thanks and appreciation to Sheikh Mohamed Bin Zayed for congratulating him.

During the meeting, the two sides reviewed cooperation relations and joint work between the UAE and Pakistan in defence and military affairs, as well as ways to strengthen them to serve the common interests of the two friendly countries.

With his UAE leg, General Asim Munir concluded his official visit to Saudi Arabia and the UAE.

The ten-day trip focused on military cooperation and saw General Munir meet senior leaders from both countries. This is Army Chief’s first trip since assuming command of Pakistan’s army.

The choice of Saudi Arabia for General Munir’s first international trip is in keeping with tradition set by previous commanders and highlights the importance of the Saudi-Pakistani bilateral relationship, particularly between the two nations’ armed forces.