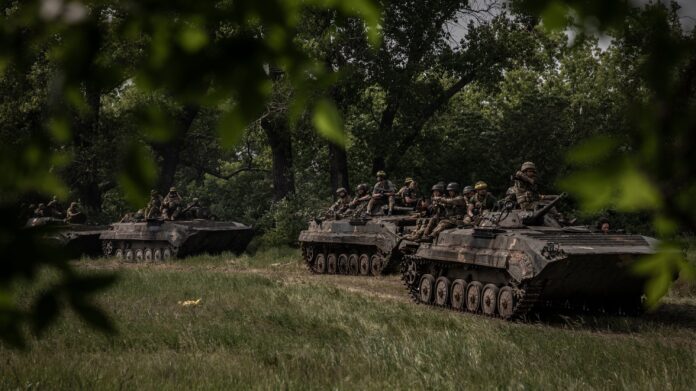 YAMPIL (AFP/APP): Behind the frontline near Kreminna, a strategically located Russian-controlled city in eastern Ukraine, Kyiv’s troops say they are facing a tough enemy.
“We fight them every day, in any weather. We attack in the direction of Kreminna, but they are not easy to defeat,” says a 24-year-old Ukrainian soldier, who goes by the call sign “Kulak” or “Fist”.
“They are good, they are tough,” he tells AFP in Yampil, a village located some 30 kilometres (18 miles) west of Kreminna and recaptured by Ukrainian forces in late September.
The city in the eastern Lugansk region — which Moscow claimed to have annexed along with three other Ukrainian regions — has been the scene of intense fighting in recent days. “We had some successes on the Ukrainian side, but nothing huge. The enemy is not giving up,” Kulak says, smiling.
For the past few days the region’s governor, Sergei Gaidai, has been posting encouraging — if slightly contradictory — messages on social media.
On Thursday, he wrote that Ukraine’s troops advanced 2.5 kilometres in the direction of Kreminna in a week. A day earlier, he said Russians had sent reinforcements to the area, while adding that the city could be re-taken early next year. According to the Washington-based Institute for the Study of War (ISW), Russian forces “appear to be preparing for a decisive effort” in the Lugansk region. Yampil looks like a hive of wartime activity.
Military vehicles criss-cross the main street of this largely destroyed village. There are nearly as many soldiers as there are civilians. In a field behind several half-abandoned houses, soldiers are busy keeping two tanks — nicknamed Natalya and Salvador — in fighting shape. The tanks have been captured during the Russian army’s retreat.
“If we liberate Kreminna, we will cut off the Russians’ supply route in Rubizhne, Severodonetsk and Lysychansk,” says one of the soldiers, Vlad, referring to other occupied towns in the region. “We don’t want the situation to be put on ice. We want to push them back, get it over with,” says Vlad, who hails from Kyiv.
Although Yampil has been liberated by Ukrainian forces during a sweeping counteroffensive in the fall, it is still within reach of Russian artillery.
A few kilometres up north, battles are raging in the village of Torske and the shelling has intensified in recent days. “It’s more or less fine. It would be better if it weren’t for these deafening noises,” Olga, a 69-year-old retired teacher, says, declining to give her last name. Every day, she meets up with other residents of Yampil outside the only operating store. The convenience store is both a collection point for humanitarian aid and a place to gather for a chat.
Despite the cold, they sit around a table in front of the store, talking and arguing as military vehicles drive by.
“We come here to talk, it’s our living room,” Olga says smiling, while a woman sitting next to her laments the power cuts and lack of aid in the village.
“They don’t care about us!” she says.
Humanitarian aid dominates conversations here.
Not far away, an 84-year-old woman wearing a blue head scarf, bursts into tears as she points to the people gathered round the table.
“When help arrives, they take everything, they don’t share anything. Why?” she says tearfully, standing in front of her heavily damaged home.
But local official Yulia Rybalko insists that “nobody is starving” in Yampil.
She says she organises the distribution of food, clothing and firewood delivered by NGOs.
Only some 600 civilians remain in the village that used to have a population of 2,500 people before Russia invaded on February 24.
But according to Olga, the former maths teacher, many of those who leave choose to eventually return.
“Nowhere is better than home,” she says.