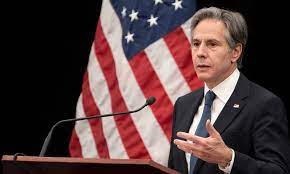 WASHINGTON: Antony J. Blinken, Secretary of State has said that the Lukashenka regime continues to repress the Belarusian people and their democratic aspirations, including with the politically motivated trial in absentia of democratic opposition leader Syvatlana Tsikhanouskaya and other democratic activists on baseless charges. To respond to these human rights abuses, the State Department is announcing action to impose visa restrictions on 25 individuals under Presidential Proclamation 8015 for their involvement in undermining democracy.

These politically motivated trials are the latest examples of the Lukashenka regime’s efforts to intimidate and repress those who seek justice, respect for human rights, and a democratic Belarus.  Ms. Tsikhanouskaya leads the pro-democracy movement from exile in Vilnius, defends human rights, and continues to press for a democratic transition in Belarus.  She is on trial along with other pro-democracy leaders, including Volha Kavalkova, head of the Coordination Council, the body tasked with facilitating Belarus’ democratic transition.  Separately, the regime last month convicted and sentenced to 12 years in prison Belarusian Sports Solidarity Foundation founder Alex Apeikin and Belarusian Olympian Alyaksandra Herasimenia. The Lukashenka regime also continues to hold as a political prisoner Nobel Peace Prize laureate Ales Bialiatski, who has dedicated his life to defending human rights and advancing democratic change in Belarus.

We will not stand by as this regime continues to harass and repress peaceful protesters, the democratic opposition, journalists, unionists, activists, human rights defenders, and everyday Belarusians. Those regime officials targeted in today’s action include members of the National Assembly of Belarus for their role in passing legislation to authorize the death penalty for persons convicted of supposed “attempted acts of terrorism,” a charge used to repress and intimidate the democratic opposition and civil society.  Some of these individuals have also supported legislation revoking citizenship from those outside the country charged with “extremism,” and confiscating property for taking “unfriendly actions towards Belarus” – similarly aimed at repressing and intimidating the democratic opposition and civil society.

Including today’s announcement, the State Department has taken steps to impose visa restrictions on 322 individuals for undermining democracy in Belarus since the fraudulent 2020 presidential election. We will continue to use all appropriate tools to hold to account those in Belarus standing in the way of their fellow citizens’ democratic aspirations.