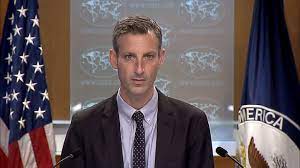 WASHINGTON (Agencies): The United States has supported Pakistan’s plan to launch cross-border attacks in Afghanistan, saying the country has the right to defend itself against terrorism.
Addressing a news briefing in Washington, State Department spokesman Ned Price has maintained that Pakistan has the right to defend itself from terrorism as the country has suffered tremendously from terrorist attacks. He said “We’re aware of the recent statement by the Pakistani National Security Committee. The Pakistani people have suffered tremendously from terrorist attacks. Pakistan has a right to defend itself from terrorism.”
The statement from the US comes a day after Islamabad threatened to target the Tehreek-e-Taliban Pakistan (TTP) militants in Afghanistan if Kabul does not take action to dismantle them. The National Security Committee (NSC), under the chair of Prime Minister Shehbaz Sharif, had asked the government in Kabul not to provide safe havens to Pakistani terrorist groups on its soil.
Pakistan has witnessed a sharp rise in terror incidents, especially in Khyber Pakhtunkhwa and Balochistan, and a suicide blast in Islamabad during the past couple of months after the TTP declared an end to the ceasefire with Pakistan. Ned Price said the US called on the Taliban to uphold the very commitment they have made to see to it that Afghan soil is never again used as a launch-pad for international terrorist attacks. “These are among the very commitments that the Taliban have been unable or unwilling to fulfil to date,” he said.
The spokesman said that it has been repeatedly said that there will be a response from the United States. “The Taliban have made commitments to the international community. But more importantly, they have made commitments to the Afghan people. Those are the commitments we care most about. Among the commitments, the Taliban have made but have repeatedly broken when it comes to their own people is an emphasis on human rights,” he stressed.
The State Department’s spokesman continued, “As long as the Taliban are not able to fulfil these commitments, we will respond in a way that registers our strong condemnation while continuing to support the Afghan people. And we’re going to be very careful not to do anything that could further imperil the humanitarian well-being of the Afghan people.” Here are the excerpts of New Price’s new briefing about Pakistan and Afghanistan:
Question: As you mentioned, unfortunately we didn’t celebrate New Year because of Afghan girl and Afghan women in Afghanistan. They are crying. Even if you watch the TV – now we are living in globalization, immediately we get news. Any update to bring or influence, as of course you guys have influences to Taliban? Any change? Because still the Taliban keep the commitment; they say this is Sharia law, they are not going to open the schools.
And number two, the second question: Pakistan announced that they are (going to) attack to Afghanistan because they said that Afghan Taliban encourage Pakistani Taliban to do something in their country. I don’t know if they attack in Afghanistan in this situation. It’s really crisis in Afghanistan.
Mr. Price: I don’t need to tell you now that we have seen repeated offenses on the part of the Afghan Taliban targeting the women, the girls, the people of Afghanistan repeatedly. Most recently it was on December 24th, on Christmas Eve, when the Taliban issued the edict barring humanitarian organizations from working with women, barring female employees of national and international nongovernmental organizations from the workplace. It was not lost on us that the Taliban announced this decision on December 24th; they may well have calculated that the United States and our partners around the world, many of our partners around the world, would have been distracted by the Christmas holiday, perhaps would have been slow in responding.
We wanted to be very clear and very swift in condemning this outrageous decision. It was that very day that Secretary Blinken, that Deputy Secretary Sherman, that Tom West, our special representative for Afghanistan, that Rina Amiri, our special envoy for Afghan women and girls, that Karen Decker, the head of our Afghan Affairs Unit, and others very clearly used their voices to condemn this move. It was just a couple days later when the G7, along with a number of other countries, put out a statement noting our collective grave concern about this reckless and this dangerous edict barring women from working with international NGOs.
This decision puts at risk millions of Afghans who depend on humanitarian assistance for their very survival. We call on the Taliban to urgently reverse this harmful decision. We are monitoring the evolving situation very closely, the impacts that this edict has had and may potentially yet have, and we’re in constant contact with UN and NGO partners on the state of their operations in Afghanistan.
We know that women are central to humanitarian operations around the world. In Afghanistan in particular, only women have been able until now, at least, to reach some of the most vulnerable people inside Afghanistan. Women must work at NGOs. They must be in a position to do so, so that millions of Afghans can receive food, medicine, winterization materials, again for their very survival.