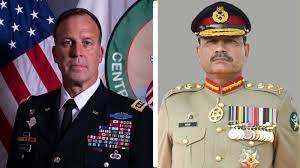 The ISPR, in a statement, said Gen Kurilla acknowledged Pakistan’s achievements in the fight against terrorism, flood relief and contributions for regional peace.

Later, Commander CENTCOM called on COAS followed by a delegation-level meeting where matters of mutual interest, regional stability and security situation, defence and security cooperation particularly military-to-military ties were discussed during the meeting.

The delegation will also visit Torkham today (Thursday). He will be apprised of counter-terrorism and border management mechanisms in place along Pakistan-Afghanistan Border.