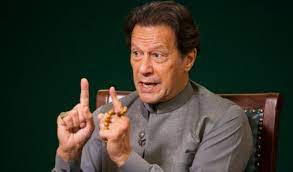 Addressing members of PTI’s student wing, Mr Khan came down hard on the ruling coalition’s leaders and said “these thieves flee the country whenever they are about to be arrested and now, after reaching a deal with the country’s powerful quarters, even PML-N supremo Nawaz Sharif is planning his return.”

The former prime minister said only justice could liberate a nation and pledged to continue his struggle for ‘real independence’ till his last breath. He said Allah had made jihad obligatory on all Muslims so that everyone stood against oppression and injustice. “As long as there is lawlessness in society, the strong will continue to oppress the weak,” he added.

Mr Khan claimed that tax collection and employment rate were record high during the PTI’s government, adding that now a ‘cabal of crooks’ had been imposed on the masses.

Earlier in the day, Imran Khan also completed consultation on the legal aspects for the dissolution of the Punjab and KP assemblies. The legal experts in their briefing said the governor could not delay the advice of the assembly’s dissolution and after 48 hours of sending a summary to the governor, the assembly would be considered dissolved.