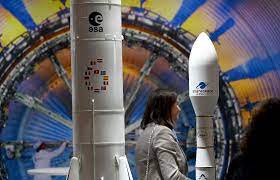 PARIS (AFP): The European Vega-C rocket was lost shortly after lift-off from French Guiana on Tuesday with two Airbus satellites on board, the company behind the launch said.

The rocket had been trying to bring into orbit two Earth observation satellites built by Airbus, intended to join an existing network capable of capturing high-quality images of any point on the globe several times a day.

If it had been successful, it would have been the first commercial launch of the rocket since its inaugural journey on July 13.

Ten minutes after liftoff, at 10:47 pm (0147 GMT), the launcher’s trajectory deviated from its programmed route and communications were lost, it said.

An “anomaly occurred” in the second stage of the launcher, “ending the Vega-C mission”, the company said in a statement.

“Data analysis is under way to determine the reasons for this failure,” it added.

Arianespace found there was no debris fallout after liftoff.

Originally scheduled for November 24, the flight was postponed for a month due to a faulty launch element.

A press briefing is scheduled for noon on Wednesday in Kourou.

The Vega-C is billed as the precursor to the future Ariane 6, which the European Space Agency (ESA) hopes will enable Europe to become more competitive in the rapidly expanding satellite market.

Tuesday’s failure is a major setback for the ESA, which has 22 member states and is responsible for European launcher programmes.

Global competition in the market has intensified in recent years, with Elon Musk’s SpaceX taking a giant lead.

European hopes have been pinned on the Ariane 6 rocket, but the postponement to the end of 2023 of the inaugural flight, which had been initially planned for 2020, has dashed the ESA’s expectations.

Europe’s space sector has been further weakened by the invasion of Ukraine, which put an end to its cooperation with Russia.

In response to sanctions imposed on Moscow by the European Union, Russia suspended space launches from French Guiana and withdrew its technical personnel.

In the absence of an alternative, ESA has been forced to turn to SpaceX to launch two scientific missions.

The Vega-C launch on Tuesday was the fifth and final launch of the year at Kourou’s spaceport.