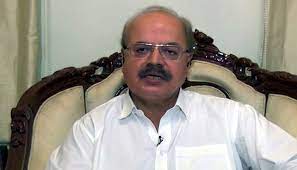 KARACHI: Sindh Minister for Agriculture Manzoor Hussain Wassan made a prediction that the general elections could be held in the country in May or June if insisted.

Pakistan People’s Party (PPP) leader Manzoor Wassan, known as a king of dreams too, made new predictions in an exclusive conversation with a private television channelTuesday.

Manzoor Wassan said that the next general elections will be held with the consent of all parties and PPP Chairman Bilawal Bhutto Zardari will definitely become the Prime Minister. The PPP leader said as new cases come to light, Pakistan Tehreek-e-Insaf (PTI) Chairman Imran Khan’s worries will increase especially when elections will close to be held.

He said the number of ‘political mental patients’ have increased in the country as Imran Khan and his party members have become mental patients after losing their government. Manzoor Wassan said as Minister of Agriculture, he has succeeded to find out medicine for the treatment of mentally ill people like Imran Khan and he has also directed the cultivation of related herbs in this regard. He added that with the use of this medicine, some will be cured within a month to six months.

He said after cultivating the herbs, they will sell them to the Hakims who will make medicines and sell them to mentally disturbed patients.

About the marriage of Bilawal Bhutto Zardari, Manzoor Wassan said it depends on his personal thinking but it is confirmed that he will definitely become the Prime Minister. (NNI)