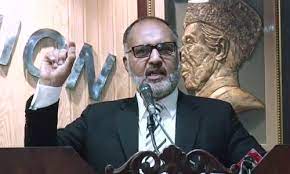 ISLAMABAD: Former Islamabad High Court judge Shaukat Aziz Siddiqui has filed an application in the Supreme Court of Pakistan seeking early hearing of his case. The deposed judge requested the apex court to fix hearing of his case in the first week of January 2023.

Siddiqui stated that the last hearing of his petition challenging the decision of the Supreme Judicial Council (SJC) was held in June 2022.
The former IHC judge had submitted the appeal against an opinion of the Supreme Judicial Commission (SJC), as well as an Oct 11, 2018, notification under which he was removed as a superior court judge for his speech at the District Bar Association, Rawalpindi, in July 2018.

In his speech, Siddiqui alleged that certain officers of an agency were interfering in the judiciary’s affairs and were trying to “manipulate the formation of benches of the high court”.

In its suggestions, the SJC had ruled that Justice Siddiqui had not only violated certain provisions of the code of conduct, but had also displayed conduct unbecoming of his stature and thus violated the traditional requirements of behaviour expected of a superior court judge. (NNI)