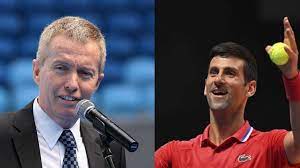 SYDNEY (AFP): Former world number one Novak Djokovic was due to return to Australia on Tuesday, almost one year after he was deported for refusing to be vaccinated against Covid-19, the country’s tennis boss said.

Nine-time Australian Open champion Djokovic was initially banned from the country for three years after losing a high-stakes legal battle earlier this year over his vaccine status.

Australia has since lifted its requirement for visitors to show proof of vaccination against Covid.

The government confirmed in November that the unvaccinated Serb was no longer banned and had been granted a visa allowing him to play in the next Australian Open, which starts in January.

“We welcome him back to Australia,” he told reporters.

“I think as we speak he’s landing in Adelaide and I think that he is going to be again the player to beat.

Djokovic, who has won 21 Grand Slam titles, has been condemned for his part in the saga, which played out as rolling anti-vaccination protests took place in Australia’s major cities.

He is scheduled to play in the Adelaide International, beginning Sunday, as he warms up for the Open in Melbourne.

“Over the years I’ve been really fortunate to start very strong in Australia and I love playing there,” the world number five said in Dubai last week after ending 2022 with a record-equalling sixth ATP Tour Finals crown.

“After obviously what happened earlier this year, hopefully I can have a decent reception there and hopefully that can help me play some good tennis.”

Djokovic last arrived in Melbourne in January for the first Grand Slam tournament of the year, claiming he had obtained a medical exemption to enter Australia without being vaccinated because he had recently recovered from Covid-19.

However, Australian border officials said he did not meet the requirements to be exempted from strict vaccination rules and he was detained for five days while pursuing an ultimately fruitless legal appeal.